Last week there was quite a bit of hype around a new browser concept coming out of Microsoft Research, Deepfish.  I was luck enough to be included in the beta so I thought I’d share some comments.

Before we look at Deepfish I thought I’d test out Windows Mobile 6 to see what the [Intilecta] website looks like.  One area where Microsoft have made signficant improvements with WM6 is with the web browser – this is clearly evident if you take a look at the following screen shot: 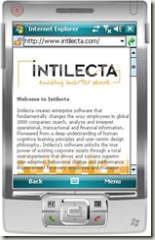 Next we look at Deepfish:  As with most other mobile applications you install Deepfish on the desktop, then the next time you connect your device it will be installed via ActiveSync/WMDC.  The following screen shots are how the website looks after navigating to the website using Deepfish. 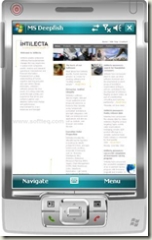 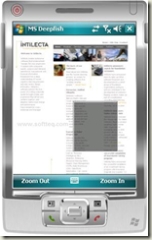 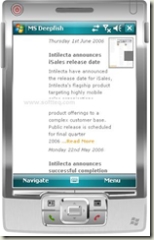 The initial screen shows the website rendered as it would be on the desktop.  Despite being quite small it is easy to determine where everything is and get an appreciation of what part of the site you want to read.  In order to read the text you need to zoom in – clearly this part of Deepfish has been designed for the smartphone as it SUX for the pocket pc.  To zoom in you press the Enter key, then use the stylus/direction pad to move the zoom square around.  IMHO I think this would be much better if you could use the stylus to select a rectangular region on the screen to zoom in on.

Once zoomed in, the experience for the pocket pc user isn’t much better.  An ideal experience would be for the user to be able to drag the stylus around the cuemap and for the screen to follow – instead you have to select a new spot on the map and then the screen moves there; similar but not the same.

I was talking to Bill last week about v2 of the Device Emulator.  This was originally incorporated into Visual Studio as part of the extensions for device developers but since [VS2005] it has been available as a standalone emulator that can be used for demos, testing etc.  Bill wanted to know whether installing the standalone version overwrote the version which gets deployed with Visual Studio.  For the record the answer is yes it does but this is definitely not evident from looking at the file system:

Clearly there wasn’t much thinking about versioning when the team were planning this one?

Alex pinged me a week or so back asking me to spread the word about the Architecture Camp that the NZ community is running.  I must confess that I completely forgot and it wasn’t until I saw this post that I remembered.  Anyhow, for anyone interested in talking shop architecture for a weekend, in a similar style to Code Camp Oz, you might want to start planning now!

My First Hour with the Smart Device Framework v2.1

Normally I wait until I can get a copy off the back of a truck before I both playing with a new piece of software but in this case I’ve been so eager I figure I’d bite the bullet and purchase a license to the new [OpenNETCF] Smart Device Framework v2.1 (with [VS2005] Extensions).  The other reason I felt I should make this purchase is that it is only $50 (single license) and that I figure it would help these guys continue their great work.

Although I haven’t really got down to playing with the various controls and classes I am suitably impressed with the level of integration and the setup process they have.  Here are just a few shots of me “opening the box”.

Installer package even has the correct icon 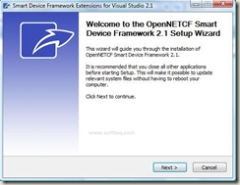 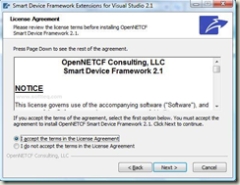 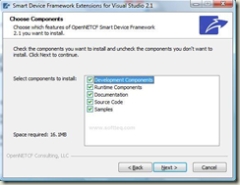 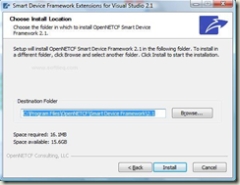 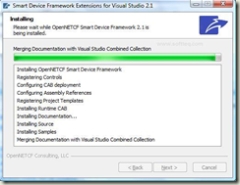 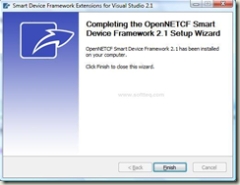 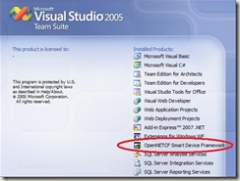 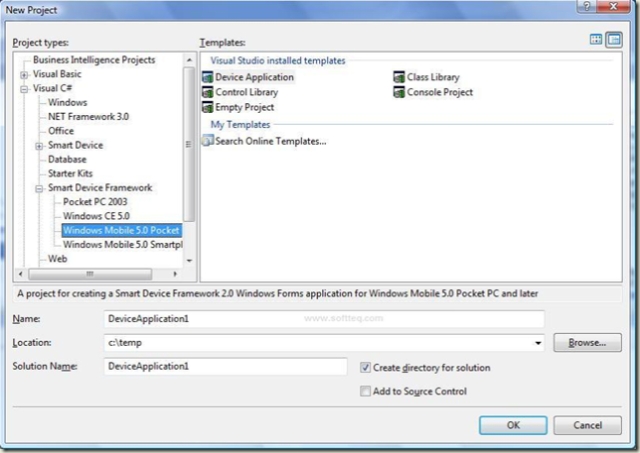 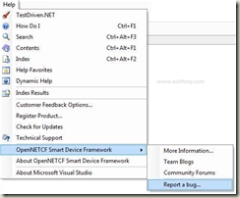 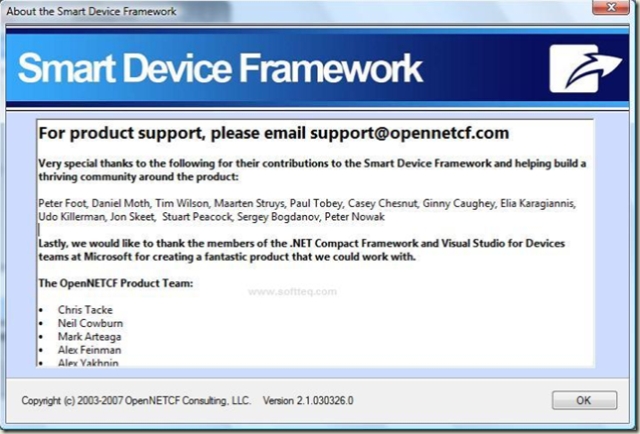 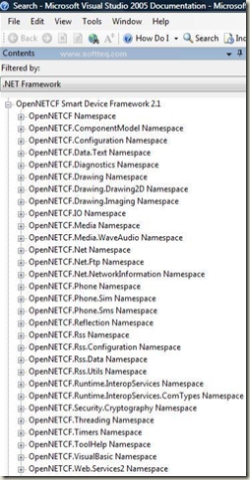 Appropriate listing in the Start Menu

Neil has just announced that version 2.1 of the [OpenNETCF] Smart Device Framework has just been released. Although they now charge for this framework it is no longer just a class library that gives you missing desktop functionality.  With tight integration into Visual Studio 2005 this framework is essential for all windows mobile developers.

Once I start playing with the new version I will endeavour to post about some of the new features I come across.

On Friday I heard an unconfirmed rumor that wireless was soon to be made free in the Qantas Club.  This morning I thought I’d put it to the test and sure enough: It’s Free. You still need to connect via the Telstra redirect site, but that’s as simple as clicking the button.

All I can say is – About Time!  Now all we need to do is convince the hotels that charging $20+ a day is just extortion.

Now Why Didn’t I think of That

I was just reading a post by Steve Lasker in which he describes how you can create a SQL Server Compact Edition database and how you can detect if the database already exists.  One of my complaints about the introduced “|DataDirectory|” substitution is that it isn’t understood by System.IO.  Luckily it doesn’t need to as the .Database property on the SqlCEConnection object returns the path to the database with the appropriate substitution made:

Having unsuccessfully attempted to image my device to WM6 I thought I’d check with i-mate to see if they had plans to release a WM6 ROM for this device:

Jose> Welcome to club i-mate support. My name is Jose, how can I help you today?
Nick> Hey Jose – quick question regarding the k-jam
Nick> given this device is a little over a year old I was wondering whether there is going to be a WM6 ROM made available for this device?
Jose> yes there is going to be upgrade
Jose> but there is no date of release

Looks like there will be a ROM out for the K-Jam (aka Wizard) but no idea on the timings.

Code Camp Oz and the Waterpolo

This weekend has been full of lots of action and adventure.  After negotiating the Melbourne traffic on Friday afternoon I managed to pick up Phil and make the drive out to Wagga Wagga (only got slightly lost around Albury). One of the best parts of Code Camp is the first evening when everyone has just arrived and ends up at the same restaurant.  Although it took about an hours to get any food it is the perfect opportunity to catch up with what everyone has been doing.

I came to the conclusion that the world is all too small. Two members of the French team that won the 2004 Imagine Cup, Aymeric Gaurat Apelli and Francois Beaussier, now work for Readify.  I remember these guys as their level of innovation set them apart in a competition where every single entry would put most commercial organisations to shame.  It’s great to see that an Australian company is recruiting some of the best up and coming international talent!

Unfortunately I wasn’t able to stay for the entire camp but I was their long enough to see Damian and Paul give their Ajax session, to give my session on Synchronisation (hopefully audio (from the Perth user group) and the slides will be available later this week) and to see Grant’s (who is now an MVP) session on TFS. 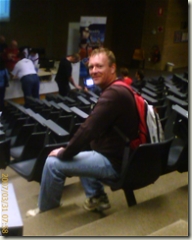 Fellow Perthite, Stephen Price (I think that’s me in that photo!), made the journey too! 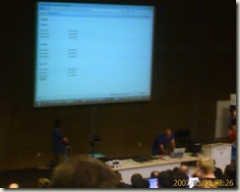 Damian looks on while Paul shows how to use an Updater Panel. 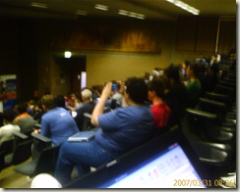 Mitch gets a shot with his JasJar while his Tablet PC sits idle.

Following another 4.5 hour drive back to Melbourne on Saturday afternoon Meg and I went out to watch the George Coleman, Jr Quartet at Bennett’s Lane Jazz Club.  Truly awesome and I’m so looking forward to the Herbie Hancock concert in Perth later this month. 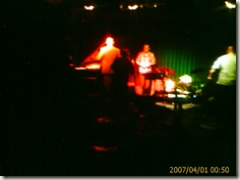 Yesterday afternoon Meg and I went to the final session of the FINA World Championships to watch the Waterpolo. This was held at the Melbourne Aquatic centre and they had setup more security than most international airports.  We thought they were going to confiscate the coffee we were taking in, but it became apparent that they were looking for more dangerous articles. When the bronze game got started we knew we were in for an entertaining afternoon as Serbia were playing Spain.  While I have a lot of respect for all nations competing, the Serbian fans are nothing short of thugs.  They are the only nation that frequently booed the opposition – talk about poor sportsmanship!

The other interesting thing was that they had setup these flamethrowers (careful Sandi, don’t get too excited) at either end of the pool that would go off whenever a goal was scored.  Even back in the stands you could feel the heat that these things gave off. 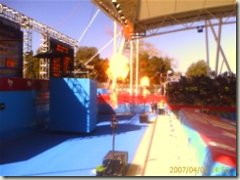