Last year I posted on “Taking Visual States Cross Platform to iOS and Android with Xamarin” and is a topic that I often come back when discussing the design and development of mobile applications. Let’s start by discussing what visual states are and why they’re important when building applications (and this really applies to any application, not just mobile applications). During the design of an application it’s common to prepare wireframes and visual designs that document each page, the key elements on each page and any associated behaviour. This typically includes documenting when elements are hidden or shown, often in response to either data changes or user interactions. The following screenshots show a recent application we worked on for Hungry Jack’s for Windows 10. This is the same page of the same application, running on the same device, just with a different window size. As you can see the difference between the first two images is quite significant as the navigation bar switches from being at the bottom (similar to what you’d expect for mobile) to on the left side. The third image simply augments the position of elements further to make better use of the available screen size. 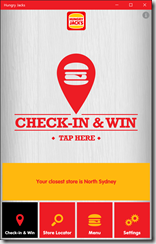 Thorough analysis during the design phase will reveal all possible layout combinations for a page; these combinations are what we refer to (at least in the Windows/XAML world) as visual states. In the case of the screenshots from the Hungry Jack’s application, each of these layouts represents a different visual state for this page. If you don’t take the time to determine what visual states exist on each page and what triggers a transition between visual states, during development you’ll find yourself toggling attributes on element on the page in an attempt to recreate each required combination. This lack of a structured approach makes it not only hard to layout each page, it also makes it hard to test as there is no definitive list of layouts that need to be verified.

On the Windows platform, Visual States are something we take for granted; they can be declared in XAML and Blend has support for designing each visual state. However, other platforms are not so blessed and have to resort to changing attributes manually in code. Some cross platform technologies make use of data binding to allow visual elements to be dynamically updated based on changes in the corresponding data (ie the view model). These include MvvmCross and Xamarin.Forms. However, data binding should be reserved for updating data values on a view, not controlling the visual states on a page.

Learning to develop for the Windows platforms, developers go through a series of learning steps.

Ok, so now that you have the basics on what a visual state is, and some background on why I believe visual states are so important, let’s discuss the elephant in the room….. Visual States only exist in XAML on the Windows platform…. making it very difficult to use visual states when building cross platform applications. So, what can we use when building cross platform? Well let’s go through the progression that developers go through. As you’d expect, all platforms support developers being able to adjust values via code. Unfortunately, this is where most developer technologies end, for example neither iOS (Objective-C, Swift) or Android (Java) support data binding out of the box. There are some third party solutions that attempt to bridge this gap, such as the data binding support in MvvmCross and Xamarin.Forms. In fact both these options provide not only the ability to data bind, but also enable MVVM and support using converters as part of data binding.

In actual fact there’s no requirement to have data binding (and subsequently MVVM and the use of converters) in order to start using visual states to control layout. However, again there’s almost no platform, or even third party, support for defining visual states.Over the weekend, I was experimenting with Xamarin.Forms and was thinking about how to define and transition between visual states. Whilst it would be nice to do it declaratively in XAML, I thought I’d better walk before I run, so I figured I’d work out a way to define visual states in code. Before getting started I thought though the basic mechanics of how visual states should work:

– Visual States should be declared in groups, and each group can only have one active visual state at any given time

– A visual state should define any number of value actions

– Changing to a specific visual state, should only adjust the current state of the group that the visual state belongs

I’ve always felt that one of the weaknesses of Visual states on the XAML platform is that they’re named using a string, and the only way to reference them when changing state, is using a string literal. So, for my attempt at a visual state manager I’m going to have my visual states defined as an enumeration. In fact, each group of states will use a different enumeration type – thus each visual state corresponds to a unique enumeration value. The end game is to be able to declare visual states in a relatively fluid manner, as shown in the following example which defines two groups based on the enumerations SecondStates and SecondStates2.

In my next post we’ll look at the different classes that make up the visual state manager and the extension methods that allow for the fluid declaration seen in this example.

Last week we were trying to resolve an issue that had been raised in an application we were building for the Universal Windows Platform, where the user had to press the back button twice in order to navigate back to the previous page. Initially we thought that we must be subscribing to the hardware back button on Windows 10 Mobile, as the issue seem to only manifest itself on mobile. However, after eliminating all calls to subscribe to the back button, we were still seeing the same issue. After a bit of further testing the issue only seemed to arise if we were navigating to a new page with the pane of the SplitView visible, but not always…. Eventually we tracked it down to the scenario where the DisplayMode is set to Overlay and the pane of the SplitView is visible (ie IsPaneOpen set to true). Navigating to a new page without first either changing the DisplayMode to Inline, or closing the pane, will result in the pane staying open, and unfortunately it still keeps the event handler on the BackRequested event on the SystemNavigationManger.

Simple solution: make sure that you force the pane closed before navigating by setting IsPaneOpen to false (assuming the DisplayMode is set to Overlay).

Earlier this month I delivered two sessions at Ignite Australia. The recording for these sessions are now available for watching