Not being a true web developer, one of the announcements that I found most interesting from Mix09 was around the Microsoft Translator service.  In the lead up to Mix, nsquared solutions was integrally involved with the creation of getting started, documentation and sdk materials around this product. 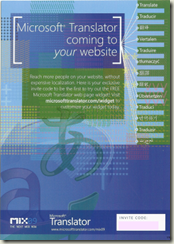 Go to http://www.microsofttranslator.com to find out more about this service and how you can integrate language translation into your application.

So you want Silverlight on your Windows Mobile device?

At the last couple of Mix events Microsoft has been talking about having a version of Silverlight for mobile devices.  There were big announcements about it being available on not just Windows Mobile, and thus continuing the any device, any browser story they are trying to sell.  The reality is that there are more issues with doing this than you’d imagine, for example: a real device application should be able to access device features but running in the browser sandbox would prevent this….. and so the list of “exceptions” begins.

But why wait until Microsoft finally ships a version of Silverlight for Windows Mobile? If you go and try out the SkyFire mobile browser you will find that you can actually see and interact with Silverlight applications from your browser. 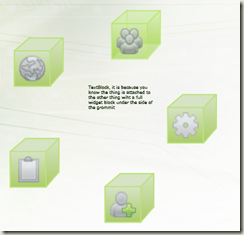 On the left is the Silverlight widget that we have on the nsquared solutions website viewed through IE.  On the right is the same widget viewed via the SkyFire browser – note that an animation is in progress and visible on the device.

So how are they doing this? Well the idea is similar to the DeepFish concept in that it’s essentially a proxy browser.  The browsing is done on the server and just the UI is rendered out to the device – not too dissimilar to remote desktop.  Whilst this of course requires a little more bandwidth it does mean that you get the full capabilities of a desktop browser.  What would be interesting to look at is what the header information is that gets sent to the server – does it see a desktop or mobile browser? 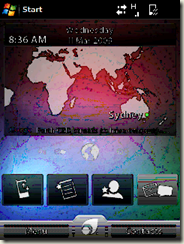 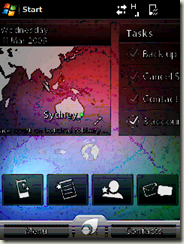 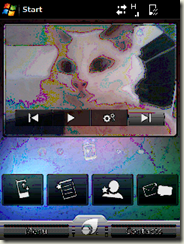 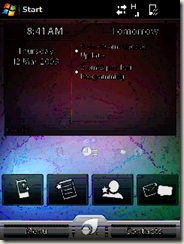 Since the announcement of Windows Mobile 6.5 at Mobile World Congress it has received some active criticism from the community.  Whilst the post from Engadget is quite disparaging, other posts, such as Long’s post on the honeycomb menu is slightly more encouraging.

Based on what was announced it would seem that Microsoft has invested into the home/today screen.  This is similar to what HTC, Samsung, Sony and other OEMs have been doing for sometime now.  Whilst it would be a welcome relief to see a different default home screen I’m not sure this is going to fix the market perception of the Windows Mobile platform.

Taking a step back, lets look at why the OEMs are focusing on the home screen.  Well, in fact the question is a little broader; why are OEMs looking at reskinning or changing the look at feel of Wiindows Mobile?  The home screen is just the starting point for this change as it’s one of the most visible/used parts of Windows Mobile.  There are a couple of points to the answer that I can see:

Now let’s go back to the work Microsoft is doing on the today screen. Currently the honeycomb interface looks nice and modern but will it in 6 months+ time (don’t read anything into that date as I’m just guessing based on the announcements from MWC) when the devices hit the market? If not, OEMs will again have to come up with their own home screens in order to continue to compete.  Further, the new home screen, if adopted by the OEMs just means they have one fewer points to differentiate on.  Upshot is that OEMs will ignore this new home screen and continue to invest in their own home screen in order to differentiate and compete.

If we extrapolate this behaviour out to the rest of the Windows Mobile platform then it indicates that OEMs are going to continue to try to change the UI of anything that ships within Windows Mobile in order to deliver a better, richer user interface for their customers.  This leads to the question as to why is Microsoft bothering revamping their user interface?  Why not focus on extensibility, customizability and core platform functionality?  This is what Windows (in general, and not just Windows Mobile) is best at – the ability to be tailored, tweaked and extended to specific markets.