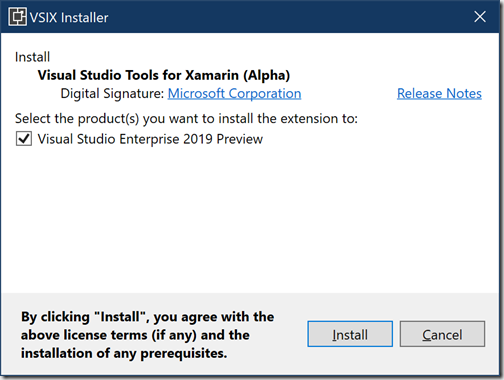 An hours or so later… 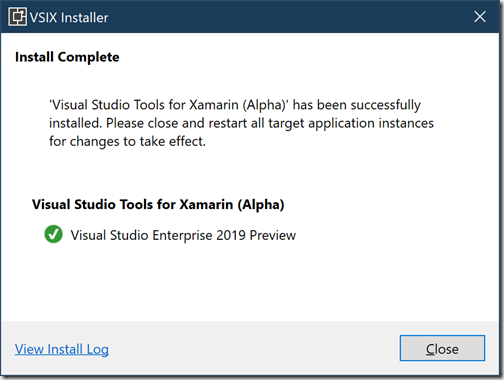 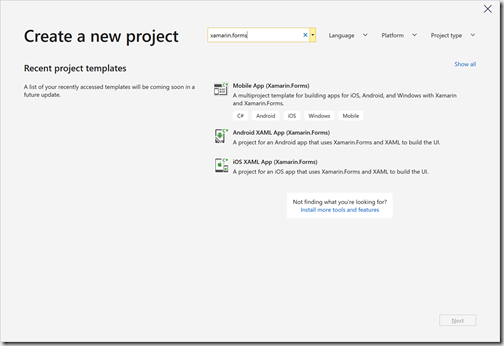 It seems that the new templates must have completely replaced the previous templates – not a great start, considering I’m likely to want to be able to create a non-shell based Xamarin.Forms application. 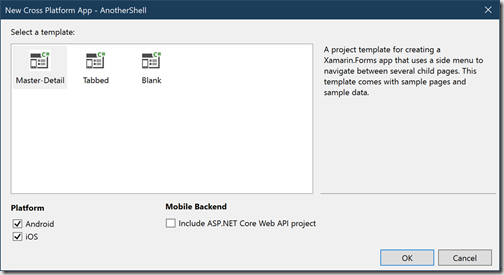 Ummm…. Where’s the UWP support? Seriously, as if UWP wasn’t failing hard enough as it is, the fact that there doesn’t appear to be UWP support in the initial Shell release it a bid depressing.

After that the new project screens all look familiar, so the next thing we’re looking at is the default solution structure. 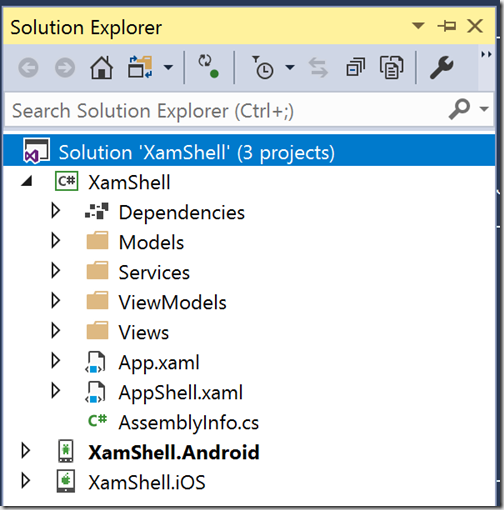 My first comment (as usual) is that the view models are stuck in the same project as all the UI elements – I consider this to be incredibly bad practice as it means you end up with a mess of dependencies and it’s way to easy to break the separation of concerns between view and view models. Having said that, this is a getting started templates, so I guess if they’d added another project it would probably alienate other developers who prefer to have everything in a single project.

The great thing is that I can select either iOS or Android as my startup project and hit run – a minute or two later after the emulator has started up the app has been deployed and is running.

Side Note: This post actually took me a couple of sessions because I got interrupted and it took a couple of days for me to get back to it. When I did, I accidentally opened the XamShell app I’d created in Visual Studio 2017, where it builds and runs without issue. Of course I don’t have the Shell templates.

Here are a couple of screenshots from the running app – Firstly I love that they’re replaced the Xamarin logo added to the new project, as shown in the splashscreen. Note that this is not actually a splashscreen and that in fact they’re setting the background on the main activitiy. There’s so debate about whether this is best practice, or whether it’s still good to use a splashscreen to improve the perceived boot time of the app. 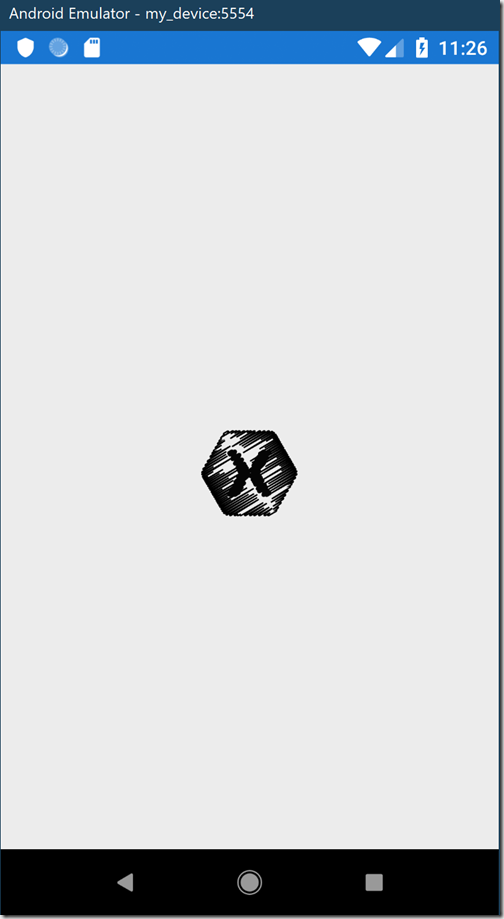 This is the master-details template, so we get things like the burger menu. The main screen includes a basic list and an add button in the navigation bar – pretty stock look and feel. 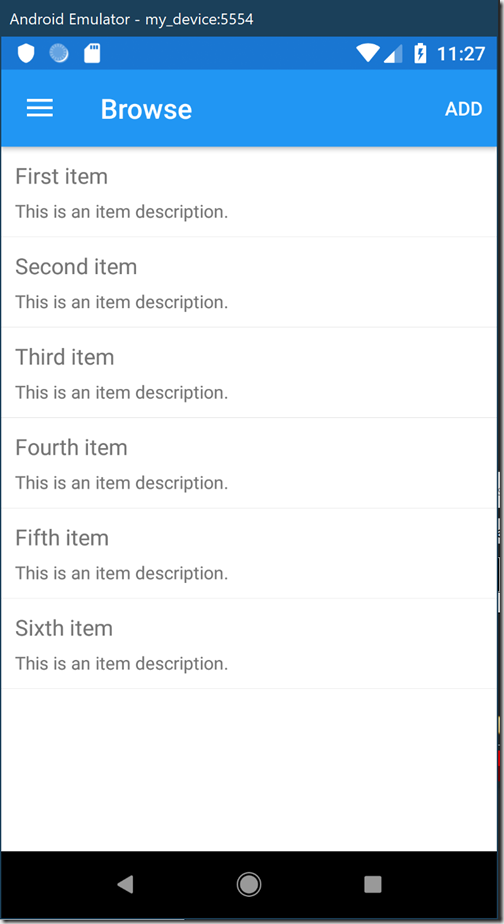 The about page is a little more interesting but again nothing mind-blowing. 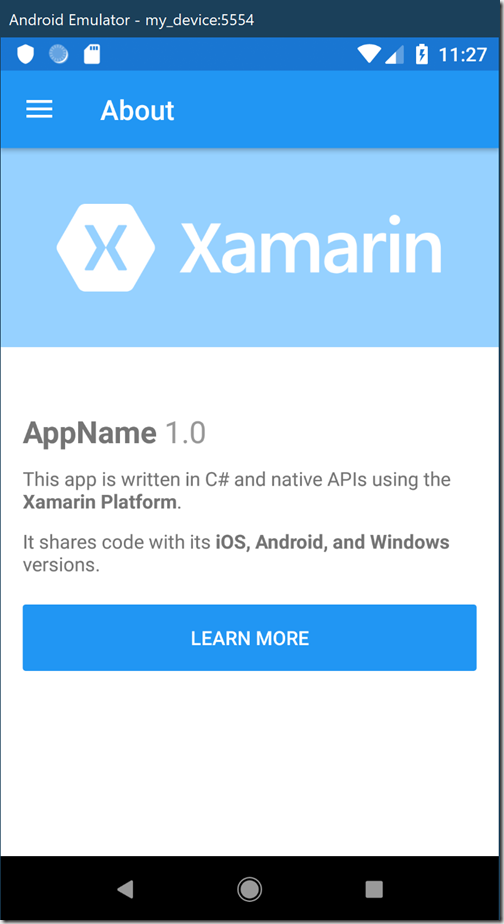 If we look in the main XamShell project we notice that in addition to the usual App.xaml, which is required for Xamarin Forms, there is now also an AppShell.xaml. At this point I did in fact switch back to Visual Studio 2019 because opening AppShell.xaml in VS2017 seemed to be a bit of a broken experience.

Opening AppShell.xaml the first thing I noticed is that styles have been setup and a combination of implicit and explicit styles defined – yes!!! this is great to see in a template. Next I noticed that two pages have been defined: Browse and About – this confused me as there are actually 4 pages included in the project. On checking the code, it appears that the other pages are dynamically created as needed. The introductory documentation on Shell provides a good overview of the key elements that make up the Shell hierarchy.

My initially impressions are that this is going to be great for jump starting basic mobile applications. I’m interested to see how far this can be taken and how it can handle more complex navigation patterns and applications. I’ll explore further the various aspects of Shell but I’d encourage all Xamarin Forms developers to give Shell a chance – let’s see whether this can be made into something amazing by providing constructive feedback to the XF team.

I’ve just installed the preview for Visual Studio 2019 and wanted to share the experience of creating a new Xamarin.Forms application.

Firstly, the startup screen. Whilst I’m disappointed not to have the news feed, the new startup screen gives you a quick launching pad for whatever it is you want do in VS2019. 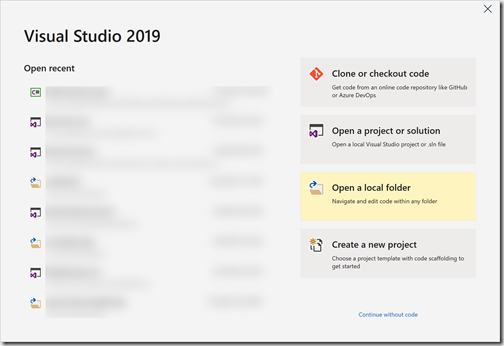 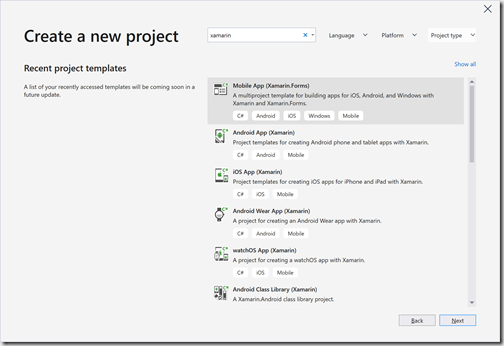 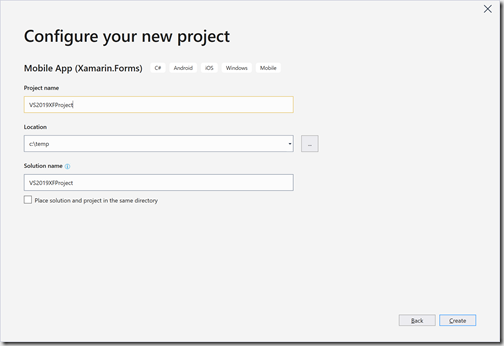 Ah and now we’re back to a familiar dialog for creating Xamarin.Forms applications. Hooray!!! there’s no option to use a shared library any more – good riddance. As you’ll see we get a .NET Standard 2.0 project where our XF pages and other logic will go. 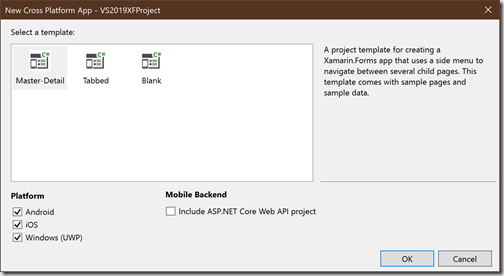 And now we have the usual solution structure for an out of the box XF application containing the project that’ll house the pages (ie VS2019XFProject) and then head projects for iOS, Android and UWP. 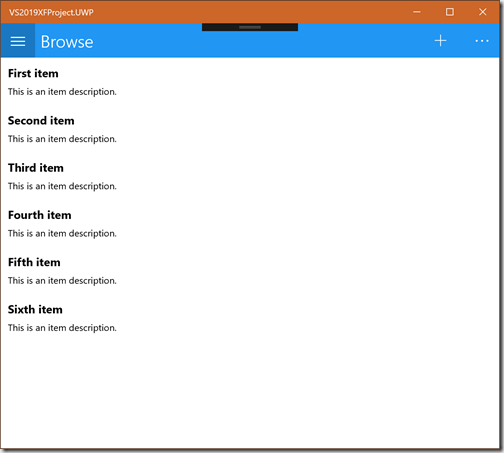 Let’s hit run and check out the newly created project – notice I picked the Master-Detail template early so we get a basic layout with a hamburger button in top left.

And that’s it. BTW the chrome around the edge of the coding window seems to be progressively shrinking with each progressive release of Visual Studio. Eventually it’ll be carved back to what Visual Studio Code offers.