Build it Beta gets Isolated Storage Exploring in Feedback Tool

If you haven’t already started Windows Phone Application Testing with Build it Beta then I’d encourage you to check it out and start using it to deploy test builds of your Windows Phone applications and gather feedback from users.

If you’re already using Build it Beta then you hopefully realise how easy it is to push out new builds of your application by either emailing them, or simply double-clicking the XAP file and using our Windows 8 application.One thing you may not have found is that you can create feedback items directly from within the application you’re testing. After launching the application your testing, swipe down from near to the top of the screen. After a second or so (as we capture a screenshot of the current screen) you’ll see the feedback form:

This morning we’ve improved the feedback form to include a storage tab – this iterates through all files and folders currently in Isolated Storage and lists them. Folders are marked in bold and you can tap on a file to launch it for viewing (this is really only useful for known files types: xml, png, doc etc).

We’d love feedback on whether this is something that’s useful.

Firstly, why the name?

Well it’s a bit of a play on words – we’re always looking to build better apps and of course during development we often release “beta” versions of the app. Hence the origin of “Build it Better Beta”.

Next, how does it work?

Windows Phone 8 included the ability to deploy applications within the enterprise without going through the Windows Phone Store. This is referred to as enterprise deployment and involves signing an application (ie the packaged application file .xap) with an signing certificate. The same certificate needs to be distributed to the devices that the application is to be tested on. Then the signed xap can be installed on the devices either via code or by distributing the application to the device via email or via a url link. Build it Beta uses this mechanism to deliver a testing tool which eliminates the complexity for both developers and testers.

Once you’ve completed the setup, all you need to do is to start sending your .xap files to upload @ builditbeta.com. Make sure you send them from the same email address that you registered with when setting up Build it Beta. We’ll ingest your xap and send you a confirmation email. You should also get a toast notification on your Windows Phone device letting you know that a new version of your application is available for testing. Click on the link in the email, or tap on the toast notification to download and install the signed version of your application.

This is the first in what will be a number of posts talking about Build it Beta for Windows Phone as we bring this service online. I’ll keep this nice and short to begin with as this is really just a notice to say that the application is in store and is available for general usage.

Bridging the Gap – One of the perils of Software Development

This morning one of my “connections” over on LinkedIn posted this image illustrating the difference between what a client wants and what they have budget to pay for:

This made me think of all the parts of any software development project where there is a potential “gap” that we as software developers spend our time trying to plug. Here are just a couple of the typical gaps we try to mitigate:

Requirements – We try to minimise the gap between the documented requirements for a project and what the actual requirements of the end users are. There are several approaches to solving this but in my experience having a close working relationship with the end users is definitely a step in the right direction. Get early version to them for their comment as soon and as frequently as possible.

There are a ton of other places during the software development process where gaps are introduced. In fact if you think about every conversation you have regarding a feature, there is always a risk that you’re introducing a gap as a result of miscommunication or a lack of understanding on what needs to be delivered.

Sochi Apps for Windows Phone but not Windows

The Unwired has a good summary of the two Windows Phone applications covering the Sochi winter Olympics. I had already downloaded them yesterday and must admit I was quite impressed with the attention to details. The apps are clean and responsive – of course, I reserve the right to change this opinion when the event actually starts and I want to see actual results and to be notified when events are on.

Fellow MVP and owner of In the Hand, Peter Foot has published a number of helper classes for developers targeting both Windows and Windows Phone. I particularly love that these enable developers to “build charming apps!”

Get them directly from NuGet or visit the CodePlex site for more information.

Aligning Characters and Spacing in Windows 8.1

When designing applications for Windows Phone we spend a lot of time aligning the left edge of virtually everything to either each other or to the imaginary grid drawn over the page. Unfortunately the SDK doesn’t make life easy for us as the TextBlock element doesn’t automatically trim white space on the left of the contents. The net effect is illustrated in the left of the following image where the “a” and “b” aren’t left aligned, despite being offset by exactly the same amount from the left edge of the page. 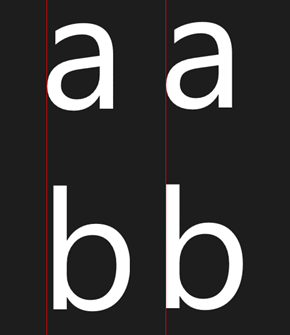 Windows 8.1 includes the OpticalMarginAlignment property which you can set to TrimSideBearings in order to remove excess whitespace. The net effect is shown in the right side of the image where the “a” and “b” are now left aligned.

Often when working with UserControls you need to wire/unwire logic when the DataContext of the control changes (eg it’s used on a page and the viewmodel which is bound to the page flows into the UserControl as the DataContext). Unfortunately prior to Windows 8.1 there wasn’t an easy way to do this. In Windows 8.1 you can do the following in order to hook up to the DataContextChanged event handler

So, how would you do this prior to Windows 8.1 and for Windows Phone? Well, one option, and I’m not saying this is the only option, is to create a different dependency property and connect it using data binding. For example:

And when you use this control, you’ll need to data bind to the CustomDataContext property:

The “{Binding}” without a path simply means that the current DataContext for the control will be passed in. You’re then free to do whatever you want with the real DataContext as you can be assured it would have been set at this point.

Organisations that discard TFS in favour of Git are throwing out the baby with the bath water.

A number of clients that I’ve worked with over the past couple of years have made the decision to abandon their internally hosted Team Foundation Server (TFS) in favour of a Git. Some have decided that they’re going to host their own Git repository; others use it in the cloud. Unfortunately most of them have been suckered into using Git without understanding what they do or don’t get as part of the package.

The first thing to observe is that the first couple of versions of TFS were a nightmare as they were overly complex to setup and even worse to manage. Luckily I was never game enough to go down that path as at the time I was working of an instance of SVN running on a VM with 500MG of RAM  on a Mini-PC box sitting under my desk (and btw it ran like a dream with checkins taking fractions of a second even from the other side of the planet). Unfortunately some organisations spent years fighting TFS handing it off to traditional ops people and expecting them to know how to manage it.

For a lot of developers the two step checkin process of committing locally and then pushing to a repository is just a waste of cycles and they won’t get much benefit from the peer-to-peer nature of Git. Those passionate about Git will argue that this is because they haven’t invested enough time into Git to learn how to use it to its full extent. I’d counter this by indicating that if you’re spending that long working with Git, then you’re not writing enough code and that your process is broken (most likely checking in too infrequently resulting in lots of large merges). My early arguments against Git were that it was unnecessarily complex as everything had to be done via a command line – really, really really, in this day in age, we have to use a command line to do checkins??? Luckily there are now several UI alternatives available for those who don’t want to see a command prompt.

With these points aside (this isn’t a post on why you should/shouldn’t use Git) it’s important to recognise that Git is really only about source control; source control makes up a very small, yet integrated, part of TFS. Particularly with the move to the cloud (check out http://visualstudio.com) TFS has undergone a transformation with new features rolling out hot of the press. Not only does it do source control, it also does task and iteration management, build automation, testing, and even team rooms for conversing with remote team members on a project. All of which are integrated so you can see what code was written to fix a bug, who broke the build and what they changed, and even get notification in the team room when a build has succeeded. This level of integration is completely missing from Git.

So you have to wonder, if these organisations are not using TFS, what do they use as a replacement for managing projects. The answer is a sad combination of email and disparate tools kit bootcamp and jira. The lack of integration means that requirements, tasks and bugs are often loss into the email abyss; code is modified and no-one knows who or why the changes were made and builds either don’t exist or are managed completely independently. Of course, in some cases someone in the team realises theses pieces of software aren’t working together, so they cobble together an integration piece which is so brittle that the build breaks more frequently because of their patchwork solution, than it does because someone legitimately broke the build.

The upshot of all this is that if you haven’t tried Visual Studio Online, I’d suggest now is the right time to take another look at TFS. Sign up, and I’m sure you’ll be pleasantly surprised….. oh, and did I mention you can opt to use Git for you source code!