Since starting at Intilecta almost 6 months ago I often get asked about what it is we do.  Without giving too much away (check out Intilecta’s website for a bit of an overview) this post should provide a bit of background on where we would like to be positioned in the market.  The following image illustrates an information triangle where the information in the base is used by the largest number of people within an organisation.  This is typically operational information that is used on a day-to-day basis to run the organisation.  As you go up the triangle fewer and fewer people need access to this type of information.  Perhaps “type of information” is the wrong phrase as it is more about how this information is accessed, as it nearly all comes from the underlying data that the organisation records about customers, sales etc. 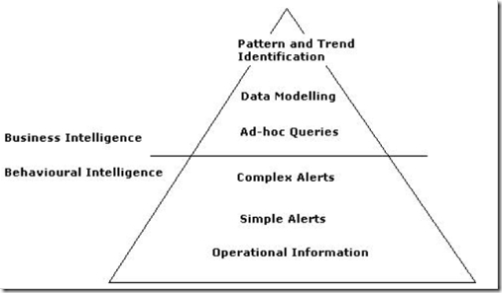 The triangle has been broken into two halfs.  The top half can be thought of as more traditional BI (ie Business Intelligence) – most BI vendors support ad-hoc querying and analytical services that allow you to do modelling, pattern and trend identification.  In fact this seems to be the direction that a lot of these vendors are travelling in (ie up the triangle, building more sophisticated analytical services to improve the patterns/trends that are identified).  Most BI vendors also play in the alerts space, which falls below the line into what we like to think of as the Behavioural Intelligence (or the new BI).  The reason for this name is that it is the alerts and the operational information that encourages behavioural change within an organisation (eg instead of waiting for an existing customer to make a new order by monitoring their consumption you can predict and be proactive by calling them when you think they are about ready to order).  Most BI vendors fail to provide operational information that is tailored to an organisation in an interface that is readily available to the user – in fact a lot rely on the organisation deploying their client tools that simply provide an ad-hoc query interface.  Intilecta is positioning themselves as a leader in Behavioural Intelligence architecting designware that is based on interface guidance from leading designers (Stephen Few, Alan Cooper and others), integrating with existing business productivity tools (for example Outlook) and deploying it using an occasaionally connected infrastructure so it is available when and where the user needs it.