Yesterday morning didn’t start out particularly well for me.  If you have ever played around with adding/removing mail accounts from Outlook you will probably know that if you remove your Exchange mail account it removes your primary mailbox (ie the OST file).  Normally this isn’t a problem because you can setup your mail accounts, reconnect to the exchange server and sync your mailbox.  Unfortunately the reason I was playing around was because the SoftTeq mail server had died so I couldn’t reconnect.  Luckily I was able to download a OST to PST application that did the trick.

The real reason for this post is that I then went looking for an alternative to us managing our own server (basically we were only using the exchange portion of SBS anyhow as SoftTeq is no longer a commercial venture). This is when I came across ExchangeMailHosting, which is actually run by IT Solutions Now.  I was looking for a hosted exchange solution that was relatively cheap, that used Exchange 2007 and supported RPC over HTTP (so I could sync on the run and from my mobile device).  For $9.95 per mailbox per month this service is quite good value.

It gets better – if you want a baseline to compare service against then these guys are quite high up there.  I filled in their online application form and within an hour I had an email saying that the service was up and running.  Within 2 hours I had setup Outlook (as per instructions in the welcome email), I had accessed their web access site and I had sync’d to my mobile device.  When their application form said that someone would contact us within 24 hours I’d assumed I’d get a phone call at 3am to complete the process – but instead “It All Just Works”!

Lastly I want to point out a great new feature in Exchange 2007:  After Windows Mobile 5 was released there was a service pack for Exchange 2003 which allowed an administrator to remote wipe a device that was syncing with the Exchange server.  Clearly this was a little inefficient since it requires an admin to get involved at 3am when a drunk employee realises they left their phone in the Taxi.  The new and improved Outlook Web Access in Exchange 2007 has the ability for the user to Self-Serve through the Options -> Mobile Devices screen, as shown in the following image. 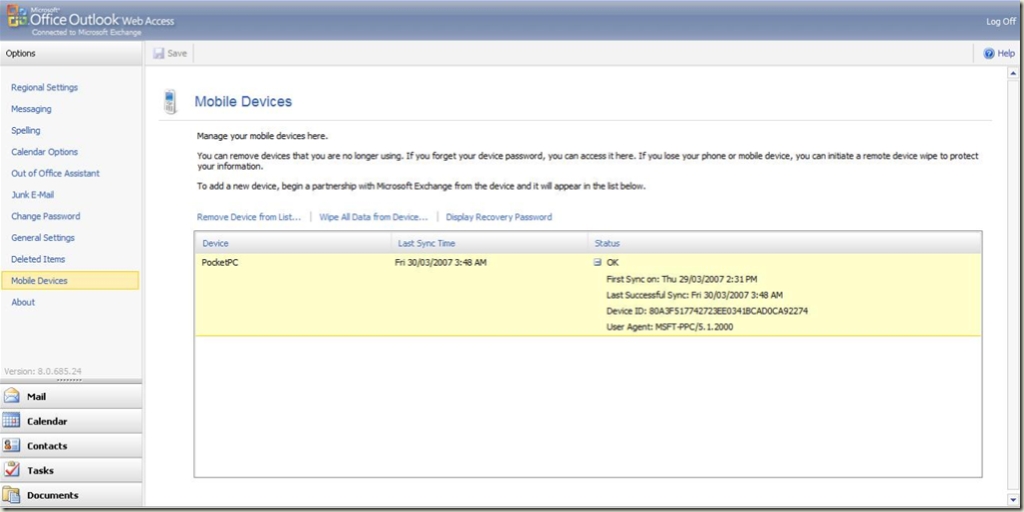