In my previous post I covered a number of the nice features of the HTC S710 (ie the HTC Vox).  I did allude to the fact that the keyboard didn’t feel as balanced and as natural to use as the K-Jam keyboard.  In this post I hope to be able to explain some of this: 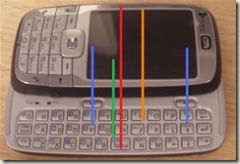 In this picture I have marked in a number of different “centres” and as you can see they don’t really align.  Starting with the red and orange markings.  The red indicates the centre of the keyboard, based around the space key, while the orange marker is the middle of the screen.  You can see from the mis-alignment that this isn’t going to be a great user experience when the eyes aren’t aligned with the middle of the keyboard.

The next pair to look at is the Red and Green markers.  The Green indicates the centre of the keyboard as defined by the middle of the QWERTY style keyboard – ie between the G and H keys where the responsibility generally splits between right and left hands.  This mis-alignment, although it would seem that it is only a small amount, is IMHO enough to be a little off-putting when you come from a more balanced desktop keyboard or even other devices such as the K-Jam or JasJar keyboards.

Lastly look at the Blue markers – these are the locations of the right and left menu buttons (not really centres as such).  The annoying thing about the left button, is that it is almost in the middle of the device which means in order to press it you have to take your left hand off the edge of the device (where you would normally hold it for text entry).

The one saving grace on this keyboard are the Cap and Fn key LEDs that are bright and clearly visible when you press the Cap, Shift or Fn buttons.

In so far as the keyboard goes on this device (relative to others) it is definitely a major low point!  I think that they tried to condense the keyboard too much and have failed to really provide a good user experience.