Over the weekend I decided to pave my machine upgrading from the Beta of Windows 7 to the RC that was released late last week. It seems that every time I do a reinstall with Windows 7 it takes less and less time to get back up and running, and this time was no exception. The only snag I ran into was getting the Fingerprint reader working.

In the previous build I just downloaded, installed and configured the driver/management software available from the Toshiba download site.  However, this time, it appears that this software clashes with the native support for biometric sensors built into Windows 7. When I go into the management software I kept getting “failed to open server” which I must admit isn’t the most helpful error messages.

A couple of forums later I decided to do a reinstall of the software. After uninstalling and restarting Windows I noticed that Windows had detected the fingerprint reader itself and was going off to windows update to pull down the latest drivers.  After it had completed the setup I thought I’d go and see whether this would be enough to get the fingerprint sensor to work.  I’d been into User Accounts earlier and had noticed the “Manage your fingerprint data” option but with the previous, not working, management software installed I just got a message saying this functionality wasn’t supported. 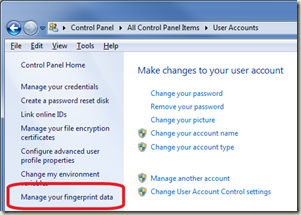 Anyhow, now that I had uninstalled the management software, clicking on this link took me through to the new TrueSuite 2.0 interface (after entering my password of course).  Here I could select which fingers I wanted to register for logging in. 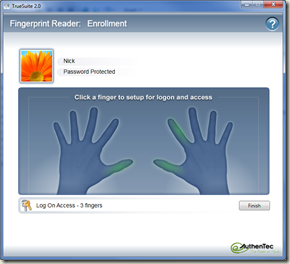 The process of registering a finger was straight forward – three swipes over the reader and I was registered.  Another couple of swipes to register some other fingers (useful for when I’m running the tablet in different orientations) and I was done.  Start-L to lock my machine, swipe and I’m back into Windows – all in under 1/2 second (I wonder how long that will last for….) 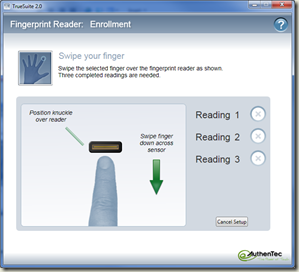 Now I’m set to do some real work now that I’ve finished playing configuring my system.