In my previous post I talked about the ColourPicker, the ProgressBar and the OpenSaveDialog controls.  Now, in an effort to assist Windows Mobile developers build stylish applications they have released another swag of controls. 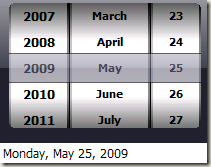 The other controls they have produced are a set of transparency enabled controls:

These controls make use of the alpha channel of images in order to give a transparent effect.  The TCheckbox also allows the developer to specify a custom image for the checkbox itself.

The controls that ship with the .NET Compact Framework are in a word “Grey”.  Without heavily customising these controls it’s almost impossible to build an attractive user interface.  I would encourage mobile application developers to consider either building their own controls (often a painstaking process to get right) or using the controls from bee4Mobile.Net