According to Twitter, which Microsoft clearly believes as the best way to communicate to its developer community, the Windows Mobile 6.5 SDK has been pulled. 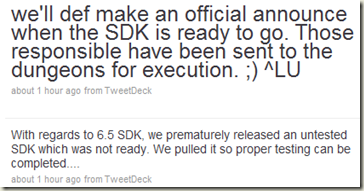 Note that whilst this acknowledges that the SDK wasn’t properly tested there is apology to a developer community that collectively has probably wasted thousands of man hours installing, uninstall and reinstalling SDKs to get machines back to a working point.

I totally agree that the SDK should have been pulled as soon as there was a known issue with it but for Microsoft to continue to insult its developer audience is just one slap after the other.