There are a number of reasons why you might want to know the identity of someone using your application. Most revolve around the need to store and track personalised information and to be able to uniquely identify any individual user. In your Windows Phone 7 application there are actually three different identities that you may be interested in:

Note that I use the word “identifier”, this is intentional as what you get back doesn’t include any profile information (not even their actual live id) about the user. The following code extracts the 32 character anonymous identifier (ANID) from the UserExtendedProperties class.

Note: To access properties in the UserExtendedProperties class you need to demand the ID_CAP_IDENTITY_USER capability in the WMAppManifest file for your application.

Alternatively, you may want to identify each device that your application is being run on (this will help resolve the situation where a single user signs into two devices with the same Windows Live Id). This is done using the DeviceUniqueId property from the DeviceExtendedProperties class.

Note: To access the DeviceUniqueId property you need to demand the ID_CAP_IDENTITY_DEVICE capability in the WMAppManifest file for your application.

Having to manually extract the ProductID this way is somewhat tedious and from a user control/library developer perspective not very reliable (a developer could pass in the same ProductID for all their applications and thus only pay once). An alternative is to access the WMAppManifest.xml file that gets deployed with the application. When you compile your application it generates a .xap file. This is little more than a compressed file (try changing the extension to .zip and extract the contents) which is expanded into a folder on a Windows Phone 7 device when it is installed. To read the contents of the WMAppManifest.xml file all you need to do is open it the same way as you would any other content that has been packaged with your application.

That was relatively straight forward…. oh, don’t forget to add a reference to the Microsoft.XNA.Framework assembly which includes the TitleContainer class.

The following screenshot shows the results for each of these identifiers. Note that because this is from the emulator where there is no signed in user, the User Id is null/empty. 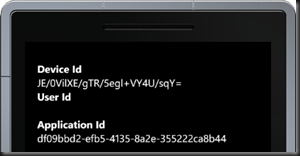