With Windows Phone 7.5 (aka Mango) we finally get access to SQL Server Compact  via LINQ to SQL from within our applications. In my previous post Change Tracking with SQL Server Compact (LINQ to SQL) on Windows PhoneI demonstrated that you can make use of some additional functionality of SSCE that wouldn’t otherwise be accessible via the managed apis. One of the other things I encourage developers to do is to use Visual Studio or SQL Server Management Studio to actually create their database structure, then use the SqlMetal command line tool to generate the necessary class files. The main reason I do this is because there is an awful lot of repetitive code that you should implement for each table and column in your database. Not only is this a waste of your time to write, it’s also very likely you’ll insert an error or two and then waste countless hours trying to debug your code.

Ok, onto the topic of this post. Lets start with a minimal entity called Movie with appropriate attributes for use with LINQ to SQL:

Here’s a couple of points about these two interfaces:

– You only need to implement this interface if you data class is going to change and you want those changes to propagate through to the UI.

– This interface is not required to do read-once data binding

– If you’re going to be reading data from the data base and simply displaying it on the screen then you can, and should, leave this interface off as it just adds unnecessary clutter (KISS!)

– This interface is not used by data binding

Here is an extract from the MSDN documentation around this interface. 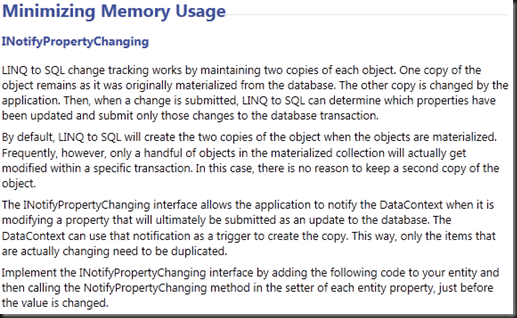 Let’s see this in action:

We’ll start with the Movie class without the INotifyPropertyChanging interface. The database is currently populated with a single Movie. We’ll run the following code and use the performance analysis tool in Visual Studio to examine what the impact is on memory.

From the Debug menu load the Windows Phone Performance Analysis 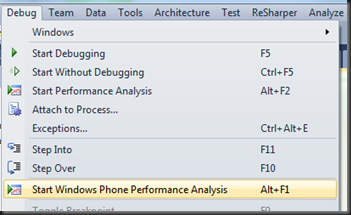 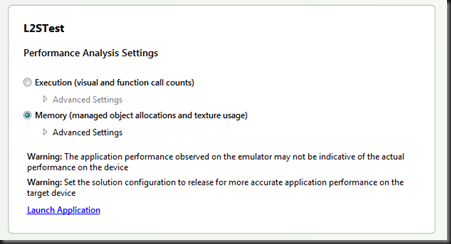 Note that in the code above we were using Console.WriteLine to indicate when the 5 second sleep has finished. One of the issues with the performance tool is that because the debugger is not attached you can’t see anything in the Visual Studio Output window. However, the emulator does have a console window which you can enable so that you can see the Console.Writeline output.

Follow this link to enable the console window on your computer: Windows Phone 7 Console Window on 64 bit machine 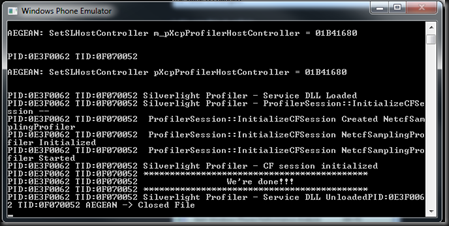 Now, lets drill into the performance report. Note that you can see two instances of the Movie class have been loaded into memory. This is consistent with what the MSDN documentation said would happen. 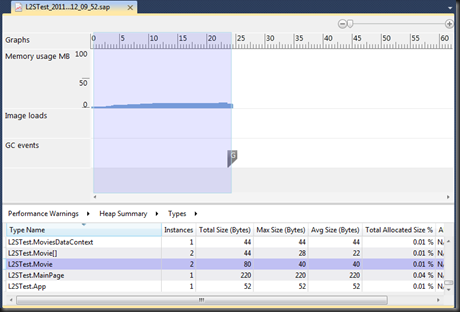 Now, let’s implement INotifyPropertyChanging. For example the Name property now looks like this

And, let’s change our code so that in addition to loading the Movie into memory, we’ll change the Name property after five seconds. 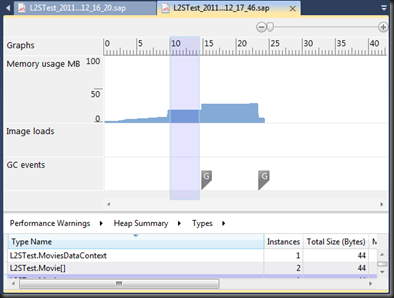 In the first time block there is a single Movie instance, as expected. Then when we modify the Name property (at approx 15 time marker) another 10Mb block is allocated to a second Movie instance. Of course, don’t forget to remove the 10Mb byte array when you are finished debugging your memory management!

This illustrates how important it is to implement INotifyPropertyChanging if you have a large number or large entities in your LINQ to SQL database.