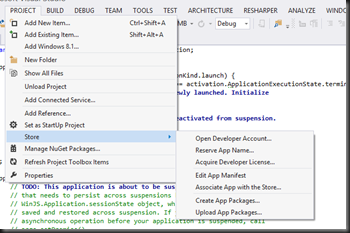 One of the other additions is under the Tools menu, where there is a Windows Phone 8.1 sub-menu. This includes the Developer Power Tools, Developer Unlock and the Application Development tools. Whilst the last two are not new to Windows Phone development, they can now be reached from within Visual Studio.

The Developer Power Tools, not to be confused with the Windows Phone Power Tools, is a standalone tool which can be used to inspect what’s going on across either emulator or device. Help is available via MSDN. 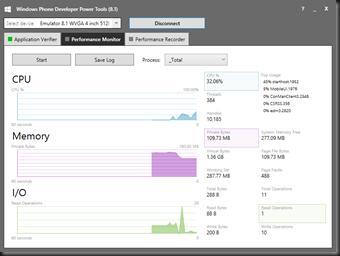 One of the most interesting thing about these tools is that you can start them, disconnect your device, put your application through its paces in real world scenarios, then reconnect and review the data at a later stage. For example, using the Performance Recorder you can check the data you want to record (eg CPU and Power) and hit Start. You can then disconnect the device, or in this case the emulator, open and run your application, and then reconnect and Stop the recording. This will prompt you to save a .etl file which includes all the data recorded. 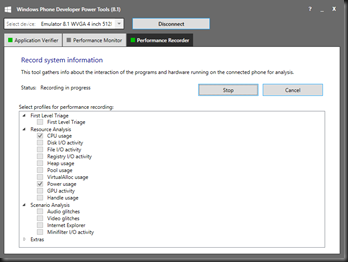 The .etl file can then be opened using Windows Performance Analyzer (just double-click the file in Windows Explorer). 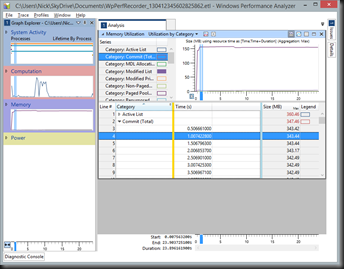