Over the past couple of years at Built to Roam we’ve built a number of media applications. Back when UWP was first launched, all media was played using the MediaElement, which was fairly familiar to XAML developers as it’s been the core element for any video or audio playback on Windows and Windows Phone for quite some time. Unfortunately the built in controls on the MediaElement were not easily stylable, resulting in most developers switching to using the Player Framework, which provided a host of capabilities out of the box such as closed captions, stylable regions and controls, and nice viewmodel architecture that made data binding easy.

Fast forward a year and a bit, and there’s a new player in town, literally. The MediaPlayerElement is a new control that shipped with the Anniversary update (v10.0.14393.0) and is definitely the control that you want to use if you want to do fancy things, such as a persistent video overlay where playback continues as the user continues to navigates throughout the application – this can be achieved by detaching the internal MediaPlayer from one MediaPlayerElement and attach it to another. It’s important to note that whilst the MediaPlayerElement has been around since the Anniversary update, features have been added in both the Creators update and more recently the Fall Creators update, so make sure you take a look at the documentation to make sure you are using features that align with the minimum and target versions you have set for your application.

In this post we’re going to look at the basics of using the MediaPlayerElement and how you can alter its styling. I’m going to start with a new UWP project, selecting the Creators update as the minimum version and the Fall Creators update as the target version. The MediaPlayerElement can be super simple to use – for example the following code is the simplest way to add video to a page that will automatically start playing.

By default the MediaPlayerElement doesn’t show any of the typical playback controls you’d expect, instead it’s just a raw video canvas that can be used to render video anywher on a page or control. In order to enable the default controls, you simply need to add the AreTransportControlsEnabled attribute set to true (I’ve removed the AutoPlay attribute as there are now going to be playback controls that can be used to start/stop video etc)

The following image shows the default controls with Progress Bar, Play/Pause, Volume, Aspect Ratio, Cast and Full screen buttons and as you’d imagine, they’re all connected to the appropriate action. 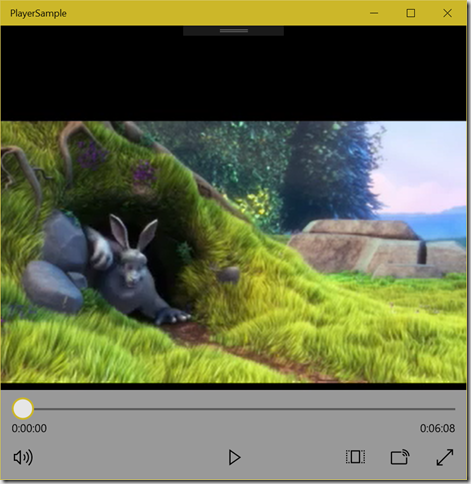 But what about other controls like fast forward/rewind, skip forward/backward etc. To customise what controls appear you need to override the TransportControls attribute on the MediaPlayerElement:

Here I’ve set the TransportControls attribute to be a new instance of the MediaTransportControls class – this is actually what the default behaviour does; the difference is that I now have access to an instance that I can set attributes on. Here I’m enabling, and showing both the buttons to skip forward/backward and the buttons for fast forward/rewind. The updated layout looks like the following: 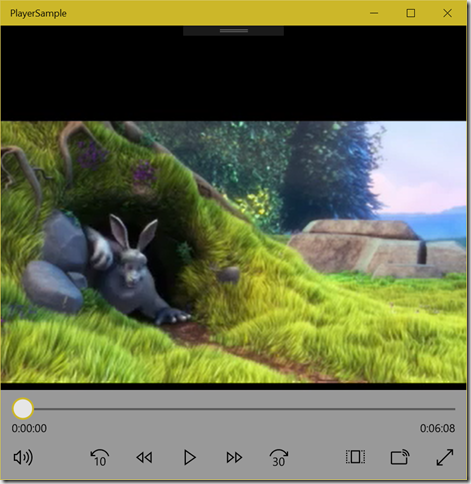 As you can see from the image the skip forward and backward buttons default to 30 and 10 seconds respectively. In order to adjust these you’ll need to override the behaviour that is associated with the skip forward/backward buttons, which can be done by attaching an event handler to the PositionReceived event on the MediaPlaybackCommandManager:

In this case, I’ve named the MediaPlayerElement in the XAML (ie by adding x_Name=”Player” to the MediaPlayerElement), and then when the page has been navigated to I’m attaching the appropriate event handler. When either skip forward or backward is pressed, the position in the playback is set to the 2 minute mark and the args.Handled property is set to true, effectivey overriding the default skip behaviour. Big reminder: if you are attaching event handlers in code, make sure you detach them too (ie PositionReceived –= CommandManager_PositionReceived in the OnNavigatedFrom method).

The fast forward and fast rewind buttons will increment the playback speed up and down by doubling the rate over the range of rates supported by the content (eg –8, –4, –2, –1, 1, 2, 4, 8). The MediaTransportControls class is clever enough to detect the supported range of rates and automatically disable the fast foward/rewind buttons when the limit on the range has been reached.

Note: In working with the MediaPlayerElement, and even in preparing the sample code for this blog post, I was not able to get the fast rewind functionality to work. Fast foward appears to work but it causes the control bar to hide and show in a weird oscillating fashion. My recommendation would be to give these buttons a wide birth as this feature is severely under baked – if you want to implement something similar, perhaps with thumbnails, you should consider implementing it yourself!!! (and yes, we’ve had to do this on a project)

In this post, you’ve seen the basics of adding a MediaPlayerElment and playing some content using the built in media controls. I’ll go into more detail soon on really customising the style of your player.

Update: It seems that by setting the minimum version of the UWP application to the Fall Creators update, it appears that fast forward/rewind seems to work. I’m guessing it may have been fixed!