So for a lot of people this might come as a surprise and perhaps even a frustration, depending on which phone carrier you are with here in Australia.  One of the limitations of the HTC Touch Dual is that it doesn’t support all of the HSDPA frequencies (mainly to keep the device as compact as it it – note that it doesn’t have WiFi either!). The initial model, released last year has a T9 keypad as you can see in the first image.  This device will work with Optus, Vodafone and 3.

For those with Telstra, you now have slightly different offering.  It’s still the Touch Dual, except it has a half-keyboard – that’s right, all the letter, just half the number of keys (see below). Oh, and of course it’s using the other HSDPA frequency, so if you get this device you will be stuck with Telstra! 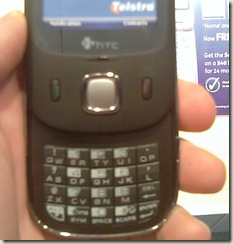 I’m not sure that I can really see this half-keyboard idea taking off as personally I think it will take a bit of getting used to.  Most of us are now used to the T9 pad, or would elect to go for a full keyboard like the TyTnII has.

Oh, on a side note – I pulled out the K-Jam the other day and had a bit of a play with it.  I must admit I still think it has one of the easiest to use keyboards – the new style have the keys too close together with no separation.  Long live the k-jam – just a pity it doesn’t run WM6.