There are a large number of posts about all the new features of Windows 7 but they quite often focus on some esoteric feature that a small subset of users might be interested in.  What I think is nice is that some of the basic applications like Wordpad and Paint have had a facelift.  One of the applications I wasn’t expecting to see change is Calculator.  It appears that they’ve not only changed the layout but also added some neat features. 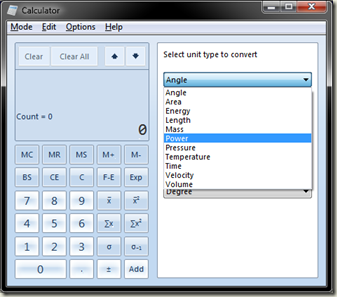 Here you can see the Unit conversion panel.  If you’re spending time converting between metric and imperial units (yes, that’s you guys at NASA too) you might find this useful.