In my continual quest to get more performance and better experience out of my HTC Touch Pro device (given the HTC WM6.1 performs so badly) I decided to give the latest build off XDA-developers a go.  The following is taken from build 23504 which you can grab from the following link http://forum.xda-developers.com/showthread.php?t=580429. The main reason I wanted to upgrade was not so much for the improvements to the experience (since I’ve already seen some massive improvements over the last couple of builds), it was more to get some of the performance benefits that has been touted in the latest builds.

Now, unlike some of the other images available, this particular build is very vanilla in nature.  It doesn’t include Touch Flo 3D, so it looks for the most part like Windows Mobile 6.5. One thing I did have to do was to change the keyboard configuration to match the Touch Pro.  This is done with the following registry setting:

The build does indeed appear to perform better.  Navigation seems to be very responsive but this may be that it doesn’t have the overhead of the TouchFlo.

Now if you look at the first of the following images you will see that there is a rendering issue around the clock.  This only seems to be on the today screen and as you can see in the second image, if you click in the notification area you get a set of expanded icons.  The expanded notification bar is in full colour and has gesture support to allow you to easily scroll through the icons.

What caught my attention was the Zoom icon. Clicking on this zooms the current screen in (see third image).  This is an awesome feature of this rom image as it allows you to zoom in on nearly anything that is rendered on the screen. Better yet, you can still interact with the contents of the screen whilst zoomed in – the fourth image shows the Getting Started page which is what is loaded when you click the icon in image 3. 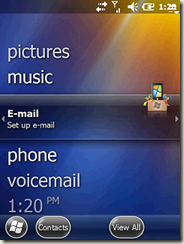 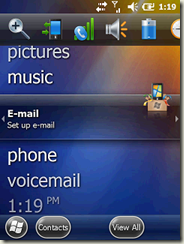 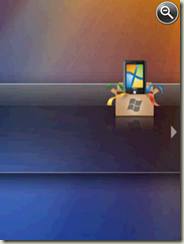 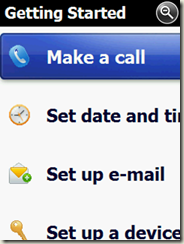