For the last couple of weeks my partner has been complaining about the phone she has been using. Actually, she’s been complaining longer than that but it finally got the better of me last week. What’s interesting is she made it clear that she didn’t want an iphone. So I decided to do the right thing and get her one of the brand spanking new HTC HD2. Now of course, thanks to the mighty fine telcos we have here in Australia, we’re not likely to see this device until early next year. So, I took the liberty of ordering direct from the UK.

No sooner had the device arrived, it was unboxed, setup and called into action.  Here’s a couple of photos of the nice packaging. That’s as much as I’m going to see of the device for the next week or so. 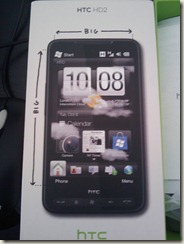 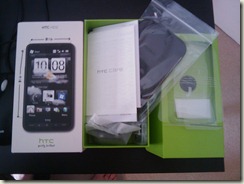 Oh, and by the way, the box isn’t lying when it says the phone is “BIG”. The screen is brilliant, camera images are clear and the on-screen keyboard works a treat.