One of the things that is becoming apparent is that the convergence between Windows and Windows Phone applications it a hot topic. Developers often ask why we have two development platforms to target, where as iOS and Android only have the one. For example iOS you can build a single package which includes both iPad and iPhone versions of an application. This argument is of course completely flawed since we’re comparing apples and oranges. If you widen the scope to include Mac development then those in the Apple world also have to target two platforms. This argument doesn’t really apply to Android since it doesn’t really feature in the desktop space.

What we are seeing is that we can increasingly share resources between our Windows and Windows Phone applications. The continual evolution of Portable Class Libraries mean that we can build reusable libraries that will work without recompilation across both Windows and Windows Phone applications. In fact you can even use these libraries in your iOS and Android projects, assuming you’re using Xamarin as your cross platform approach.

Unfortunately all this discussion of convergence at an dev platform layer completely ignores what’s going on at the user experience level. The reality is that you don’t need technology convergence in order to build a consistent user experience across both platforms. What’s been interesting to watch is how Microsoft tries to converge the look of Windows and Windows Phone first party applications. Whilst  both interfaces are laced with the essence of Metro Modern UI, there are some significant differences between them.

Take for example the Hub/Panorama experience – Windows 8 didn’t have a control for this, where as Windows Phone has the Panorama control; Windows 8.1 now has the Hub control which makes it easier for developers to build a hub style experience. The Hub and Panorama controls aren’t the same eg the hub control typically has a hero pane, where as the panorama has a background image which has parallax scrolling.

If you look at some of the Microsoft applications, such as Bing News, you’ll see that they’ve taken UX convergence to the next level, attempting to minimize any difference between the platforms. Below you can see the Windows Phone Bing News app, followed by the Windows version. 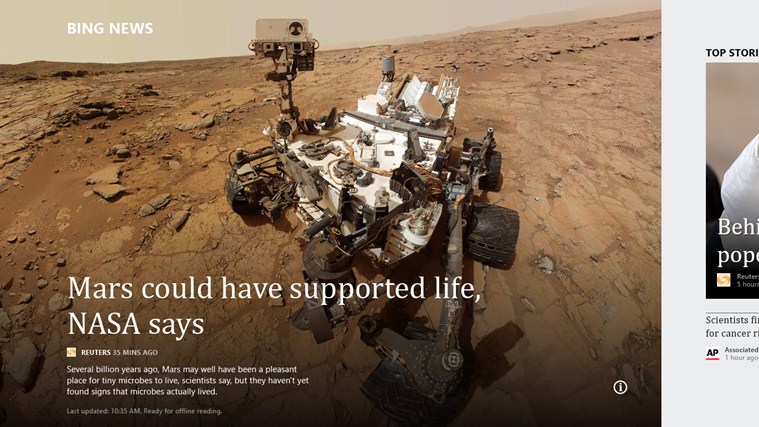 The question you should be asking (and Microsoft should be answering) is whether you should be sticking to the standard Panorama look and feel, or should you be trying to match what Bing News is doing and aligning with the Windows Hub control?