As a long-serving Windows Phone developer I embraced this decision as the emulator was based on Hyper-V which meant that it played nicely with the Windows Phone emulators – I could now do cross platform development, even when I didn’t have real devices with me. Unfortunately, Microsoft have indicated that the emulator is no longer going to receive updates, so anyone wanting to dev/test on more recent builds of Android are out of luck. This was really frustrating as the emulator was both quick (relative to the out of the box emulators from Google – historically) and didn’t require another emulator sub-system (as it worked on Hyper-V).

Recently, Microsoft have actively discounted Windows Phone, making it very hard to justify any developer resources on building for Windows Phone…. it also makes me question the value proposition of UWP over WPF, but that’s a topic for a different post. The upshot is that there is no longer a reason for me to have the Windows 10 Mobile emulators installed, which means I have no need for Hyper-V, which means I can use any one of the great Android emulators out there that don’t play nice wiht Hyper-V.

After installing the Google emulator you can launch your application on the emulator the same way you would to a real device – it appears in the devices dropdown. You can also access the different emulator images via the Android Emulator Manager.

Whilst the Android Emulator Manager is not a great looking dialog, it does allow you to customise and launch the different emulators. 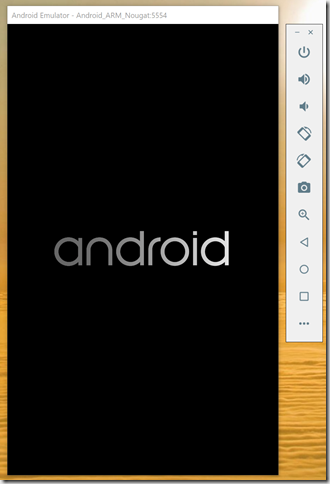 I’m a convert – Whilst I’ll still use a real device for most development work, having a good emulator is critical for those times when I don’t have a device with me. Cudos to Microsoft for firstly pushing Google to build a better developer experience and secondly making the Visual Studio installer so simple to install the emulator.

Sidenote: I did have to update one component from the Android SDK. Make sure you read the build output window in Visual Studio if you are running into issues as it pointed me to an out of date component.