In my earlier post I covered creating and debugging an ASP.NET Core service using Docker Desktop. I’m going to build on that and look at how you then push the service into an Azure App Service. Normally I’d simply use the publish option that would allow me to push the service directly into an Azure App Service – this would run the service in much the same way as it runs locally if I was debugging on IISExpress. However, since I’m debugging via a docker container I figured it’d be great to push to Azure in a way that it continues to run in a container. Actually the reason I explored this in the first place was that I’ve been experimenting with GRPC and currently this doesn’t seem to be able to be supported on a regular Azure App Service. I figured if I could run my code in a container there would be less restrictions so I would be able to get GRPC to work (this is work in progress still).

What I did notice in Visual Studio is that when I right-clicked on my ASP.NET Core project and selected Publish, one of the options I saw was to Create new App Service for Containers. 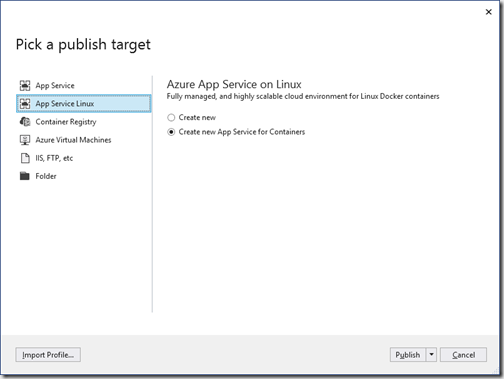 Clicking Publish started the wizard to allow me to create the appropriate resources in Azure. 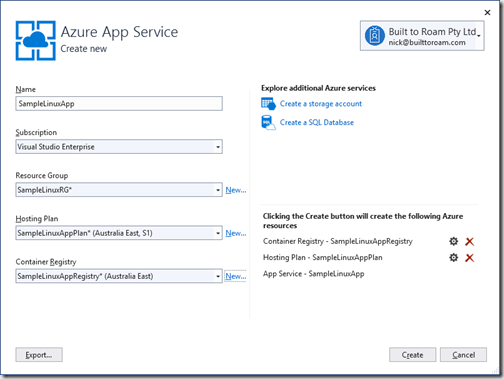 Clicking Create will trigger the creation of the selected Azure resources and then proceed to publish the application.

Note: My initial attempt to published failed with an error

“The system cannot find the file specified. In the default daemon configuration on Windows, the docker client must be run elevated to connect. This error may also indicate that the docker daemon is not running.”

Turns out I didn’t have Docker Desktop running (I have so many apps like Slack, Teams, Skype etc that run in background that I force quit most of them each day to try to retain some semblance of a reasonable battery life on my laptop).

Once I realised that I needed to start Docker Desktop, the publish process kicked off and I saw the Docker deployment console appear with quite a detailed breakdown of the upload status – seriously why can’t Visual Studio’s build progress window be this useful. I really need to hand it to the Docker team as their uploading was super resilient. I started off uploading off our standard wifi connection which is based on an ADSL connection, so minimal upload bandwidth. I got impatient so switched mid-upload across to my mobile hotspot – after a second or two delay, the upload retried and continued without missing a beat. 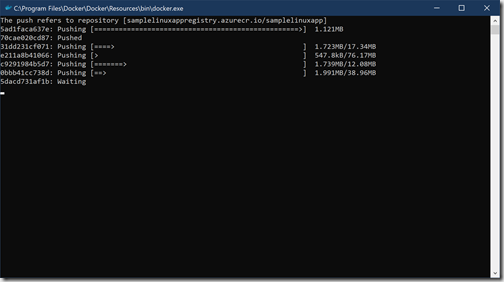 Once publishing has completed, the Azure App Service should be all setup and ready to go with your code already published. You can use the Site URL in the publish information pane to launch the service for testing. Since my application was a web api, I’ve appended the /api/values so that I get a valid response from the Get request.

One of the thing that continue to amaze me about Visual Studio is the ability to create and publish new projects to Azure. Of course, for production apps, you wouldn’t follow this process at all but it does make spinning up end to end prototype applications a walk in the park.