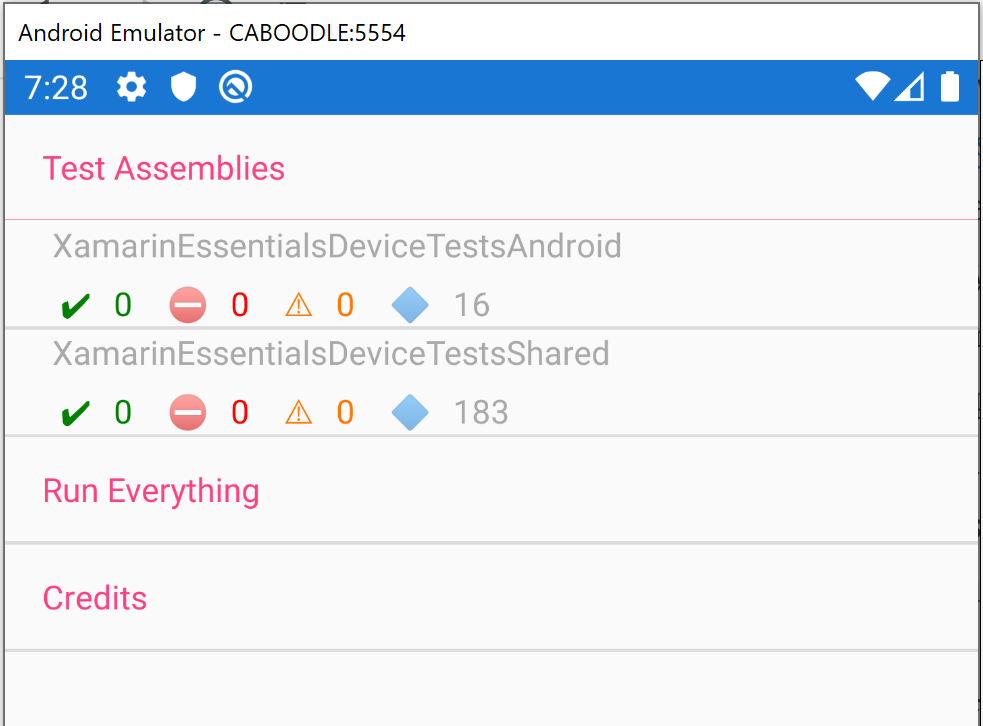 As a developer working with Xamarin or Xamarin.Forms you should be aware of the Xamarin.Essentials package that Microsoft have been developing that “provides developers with cross-platform APIs for their mobile applications”. If you haven’t taken the time to look through the source code, it’s well worth cloning the repository and taking a look. Not only is this a great example of how to do multi-targeting, they’ve also taken the time to invest in device specific tests. In this post we’re going to look at how to run the device tests for Android in the same way that it’s run as part of the Azure Pipelines build script.

The first thing to do is of course clone a copy of the repository and then launch the solution in Visual Studio – before we try to run the device tests we’d better make sure everything is able to be built and run. Unless you’ve been using the same machine for a long time, you’re unlikely to have all the difference MonoAndroid SDKs installed. When you take a look at the Dependencies for Xamarin.Essentials in the Solution Explorer window it’s likely to look similar to what mine did.

The good news is that if you force a build, some of these are likely to go away. For example I actually did have 8.0 and 8.1 installed, so after the build they were resolved and the warning indicators disappeared. Unfortunately, the bad news is that I still had a couple of missing versions.

Installing the missing Android SDKs should resolve the Android dependencies. If you’re still seeing a warning for the UAP dependency, you need to verify that you’ve got the Windows SDK v 10.0.16299 installed.

The build process for Xamarin.Essentials is driven from the azure-pipeline.yml file in the root of the repository. This YAML file defines various jobs, one of which is the devicetests_android, which as the name suggests, runs the device tests. Actually this job invokes build.sh, specifying the test-android-emu target. The build.sh is actually just a proxy for running build.cake.

Note: You need to invoke this command from the DeviceTests folder.

Unfortunately, simply running the Powershell script from a command prompt isn’t sufficient. There are a few steps you’ll need to jump through in order to get the script to run correctly. Without making any changes, if you run the Powershell script you’ll most likely see an error similar to the following image.

Whilst the error is highlighted in red, the actual cause of the error is in light grey font and indicates that JAVA_HOME hasn’t been defined. Easily fixed by using the set command (make sure the path to the JDK matches where it is on your computer).

Also, whilst we’re setting environment variables, check that ANDROID_HOME and ANDROID_SDK_ROOT are set to the root folder of the Android SDK installation (typically C:\Program Files (x86)\Android\android-sdk on Windows if installed via Visual Studio installer)

Suggestion: You’ll find that invoking the Powershell script can be quite time consuming because Xamarin.Essentials has to be built (once for each supported platform) and then the emulator needs to be created and launched. To accelerate this process, after running the script the first time, you can temporarily disable the build by commenting out the “.IsDependentOn("Build-Android")” line in the build.cake file.

Now, when you run the Powershell script, you’re likely to see a different error. Again, it’s not the highlighted error that contains the useful information. Looking a few lines earlier you can see that there is an error relating the system image that the script attempts to use.

Again, fixing this issue is relatively easy. You just need to pick one of the existing system images (listed alongside the error) and use it to set the ANDROID_EMU_TARGET variable.

The next error you’ll see is at the point where the script attempts to launch the emulator. It will fail, indicating that it can’t find the file specified.

It would appear that the build script, build.cake, attempts to call “emulator.bat”. However, this file doesn’t exist. Instead, there is an emulator.exe – we just need to adjust the build.cake to use .exe instead of .bat when locating the emulator command.

Unfortunately there’s also an issue with the search logic, resulting in using a copy of emulator.exe that doesn’t work. After making the above change to .exe, you’ll see that it attempts to launch the emulator but comes up with an error “PANIC: Missing emulator engine program for ‘x86’ CPU”.

Again, this issue is easily fixed with a small change to build.exe to get it to search for the emulator.exe in the correct folder. In the following code, we’ve adjusted the search logic to look in only the emulator folder on Windows.

Finally, when you run the script now, it will run through without error. However, you will see a Windows Security Alert requesting a rule be added to the firewall. You’ll need to click the Allow access button in order for the emulator to talk back to the build script – it uses a TCP listener to retrieve the results from the device tests.

After granting permissions, you should see the following output – if you want more details on the device test output, there’s an xml file that is returned which has the full details of the test execution.

One last comment: If you have the emulator running when you run the device test script, you’ll find that it generates an error at the end of running the script. When the script attempts to launch the emulator, emulator.exe will detect the running emulator and will exit immediately. At the end of the script it attempts to terminate the emulator.exe process – since this process has already ended, it throws and error. You can ignore this error as the device tests will still have executed correctly.

2 thoughts on “Running Android Device Tests for Xamarin.Essentials on Windows”