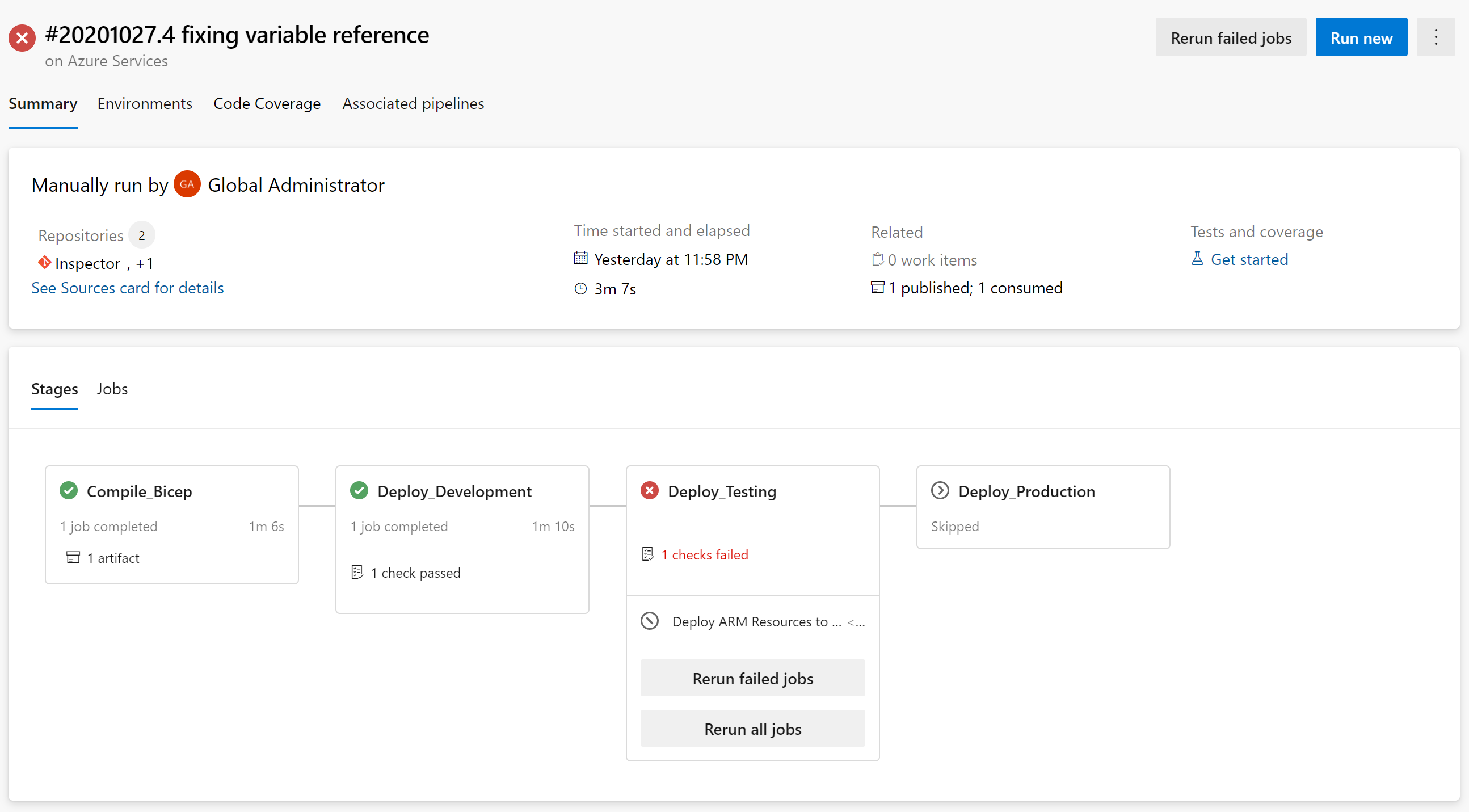 Previously I’ve posted on developing Azure Bicep code using Visual Studio Code and on how to use an Azure DevOps Pipeline to deploy bicep code to Azure. In this post we’re going to go one step further and look at deploying resources defined using Azure Bicep to multiple environments. Our goal is to fully automate this process, so we’re going to leverage Azure DevOps Pipelines to define a build and release process.

You might think these goals are too hard to achieve using a single build and release process but the good news is that most of the heavy lifting is already done by Azure DevOps.

Here’s a quick summary of what we needs to setup:

A couple of things to note about this bicep file

To create these environments, click on the Environments node under Pipelines from the navigation tree on the left side of the Azure DevOps portal for the project. Click the New environment button and enter a Name and Description for the each environment.

For each environment we need to limit deployments so that only code from the appropriate branch can be deployed to the environment. To setup a branch control check for an environment you first need to open the environment by selecting it from the list of Environments. From the dropdown menu in the top right corner, select Approvals and checks. Next, click the Add check (+) button. Select Branch control and then click the Next button.

In the Branch control dialog we need to supply the name of the branch that we want to limit deployments from. For example for the Development environment we would restrict the Allowed branches to the develop branch (specified here as refs/heads/develop).

Note here that we’ve also included refs/tags/* in the list of Allowed branches. This is required so that we can use the bicep template from the Pipeline Templates repository. I’d love to know if there’s a way to restrict this check to only a specific repository, since adding refs/tags to the Allowed branches will mean that any tagged branch in my repository will also be approved. Let me know in the comments if you know of a workaround for this.

The Testing and Production environments are both going to be restricted to the Release branch. However, we’re also going to enforce a check on the branch to Verify branch protection.

The only difference between the Testing and Production environments is that deployment to the Production environment requires a manual approval. This makes sense in most cases considering you may need to co-ordinate this with a marketing announcement or a notification to existing customers.

Setting up an approval gate starts similar to adding branch control. Open the environment and go to Approvals and checks. Click the Add check button and select Approvals. In the Approvals dialog, enter the list of users that can approve the deployment, adjust any of the other properties and then click Create.

We typically set a very short approval timeout period to avoid the scenario where multiple deployments get queued up behind each other. If we create another deployment before the first has been approve, we prefer to only have the latter deployment pushed to the Production environment. Of course, this is something your team should discuss and agree on what strategy you want to employ.

As you can probably deduce, the ResourceGroupLocation will be the region where all the resources will be created. For simplicity this will assumed to be the same across all environments. The AzureSubscriptionConnectionName we’ll come back to but needless to say, it’s the same connection for all stages in the pipeline.

We’ll show these variable in action shortly but it’s important to remember that any variable that needs to vary, based on which Enviornment it’s being deployed to, should be defined in the appropriate variable group.

The build and release process is going to be defined as a yaml pipeline in Azure DevOps.

Before we can jump in to write some yaml, we need to setup a couple of service connections.

I’m not going to step through process of creating these connections, since you can simply follow the prompts provided in the Azure portal. However, it’s important to take note of the name of the service connections.

Here’s the full build and release pipeline, which we’ll step through in more detail below.

Trigger – we’ve setup this process to kick off whenever code is committed to the develop environment.

Resources – this process leverages the templates from PipelineTemplates, which requires the definition of a resource pointing to the appropriate tagged release in the pipeline templates github repository.

Stages – there’s one build stage, followed by three release (aka deploy) stages. The steps for the build stage leverage the bicep template from pipeline templates, in order to generate the ARM template. The ARM template is then executed in each of the environments and deployed to the appropriate resource group.

The three deploy stages all used the same template, that we’ll see in a minute, coupled with an environment specific parameter value. For example the first stage passes in a parameter ‘Development’.

As I mentioned, the three deployment stages are identical, except for some parameter values that are defined for each environment. In this case the template referenced for each stage includes creating the resource group and then planting it.

Throughout this pipeline, there are various variables referenced. The important thing to note is that the variables need to exist for each environment, or are environment independent.

The Common Build Variables group was imported in the build and release process yaml file. The ResourceGroupLocation is the only variable from this group that’s used within this template.

The deployment pipeline template has three steps: The first simply outputs variables so that it’s clear what environment is being built. Then there’s a task for creating the resource group, and then lastly a task for deploying the ARM template.

Running the Pipeline End to End

In the post we’ve defined three different environment and configured Azure DevOps to have different variable groups for each of the environments. Here you can see an execution of the pipeline with the build stage, followed by three deployment stages.

In this case note the Testing deployment failed because the resources were being deployed from the wrong branch (develop instead of release). Unfortunately because this one stage failed, the entire pipeline was marked as failed.