Ok I have to admit I’m a big fan of everything Office 2007 with one MAJOR exception.  The synchronisation built into Outlook 2007 sux and is considerably worse than Outlook 2003 – don’t ask me how it can be worse but it is.  I used to synchronise using RPC over HTTP so that I can sync regardless of what network I’m on.  For some reason this seems to hang.  To get around this I now connect to the VPN and sync using the LAN.  This was acceptable until today.  I’ve been sitting at SQL Code Camp (NZ) on the CafeNET wireless network (plug for the kind sponsors of this event) and despite being connect to the VPN I still can’t sync my mail.  I can however access the OWA web client at reasonable speed – go figure.  Microsoft you MUST learn how to build a product that can synchronise, afterall it’s just not that hard.

Update: After a thinking about this post again last night I realised that I should probably include some footage of exactly what’s going on and why I think that the information provided to the end user in Outlook is pathetic and occasionally just plain wrong! Here is a rough sequence of images (thanks to SnagIt) that shows just how bad Outlook is.  Remember I am connected using a VPN connection and I can not only access my email using OWA, I can also access the fileshare on the same server that Exchange is running on (we are using Small Business Server).

Just Connected: This seems to be quite sensible, Outlook detects that I’ve connected to a new network so it goes exploring to see if it can communicate with the exchange server 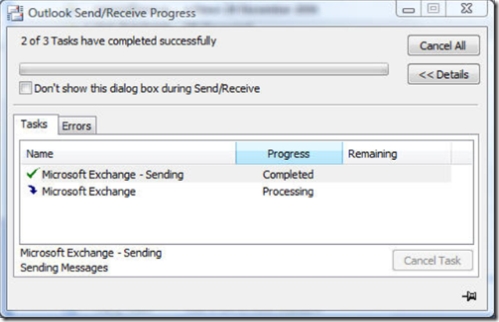 Sending Completed: Progress indicator states that “2 of 3 Tasks have completed” – ummm, I only see 2 tasks in the list and only 1 of them states that it is complete.

Not Really Completed: Hang on, the progress indicator states that Sending was completed, yet I still have mail waiting to be sent (I actually pressed send yesterday morning and have been waiting over 24 hours for this to go – I’m glad this wasn’t an urgent email). 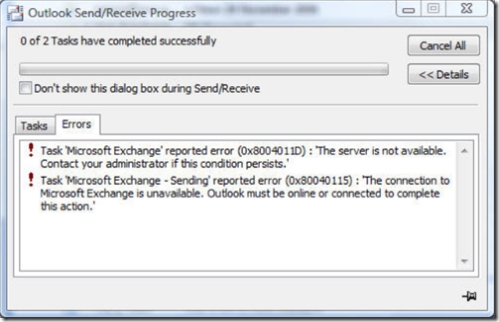 Now there’s an Error: Oh, so now Outlook has realised that yes there were indeed only 2 tasks and that neither could be complete because the server is unavailable (remember at this stage I can still access everything on this server)

Update 2: Turns out that half my problems were related to my Small Business Server (which is of course running my exchange instance).  This server has been extremely reliable but decided over the weekend to “require a reboot”.  Of course there was nothing in the event logs to indicate this and AFAIK there was no way of my working out what was going wrong.  I was online talking with SBS guru Wayne Small when I decided to logon using remote desktop, check for (and install) any updates and then reboot the server.  Not sure whether it was an update or the reboot but the server seems to be ok again and I once again have email (on either RPC over HTTP or VPN connection).  The moral of this story is still that the error information is not good enough.

One trick I did learn from Wayne, that perhaps was in the Outlook 101 lesson I must have missed, was that if you hold down Ctrl and click on the Outlook icon in the taskbar there are a couple of additional options in the pop-up menu.  The one that helped me out a little was the “Connection Status…” item.  Great tip if you are having connectivity/sync issues with Outlook.  Thanks Wayne!