I happened to be poking around on the Microsoft Download site today and came across something which may be of interest to anyone with young kids who may have an interest in being the next Bill Gates of the world.  When I download stuff off the Microsoft download site I often take a look through the list of downloads that other people have also downloaded.  In this case this revealed Microsoft Small Basic (v0.2).  Wondering what this was I downloaded and was pleasantly surprised – its a mini-programming environment, no debugging that I’ve found but the user interface is quite minimal and much less confusing to a newbie than Visual Studio. 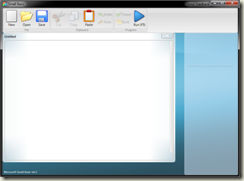 Initially the screen looks just like any other text editor except for the Run button on the right end of the toolbar.  Note that they’ve kept with F5 to run your application.

As you start to type you get super-cool intellisense – I can’t wait to see this in Visual Studio.  Note that you can move through the intellisense list using the up and down arrow buttons. Each item has a brief description within the intellisense window and then a more detailed description on the right side of the screen. 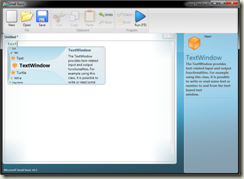 Of course the canonical example is to do Hello World.  Doing this is straight forward with the TextWindow.WriteLine command.  Notice how the information on the right is simple and designed not to confuse, yet informative enough to understand how the method work.  In the second image you can see the error window at the bottom of the screen indicating that there is something wrong with the code you have written.  Whilst this isn’t as informative as some of the debugging information within Visual Studio, again there is enough to point to where the error is located. 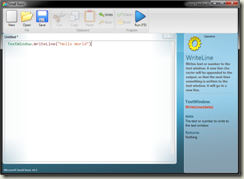 When this application is run you get a standard console window that renders “Hello World”.  Note that when you press F5 or the Run button the development tool gets coloured over to prevent you modifying code whilst it is executing.  This isn’t the greatest experience, particularly when you are trying to work out where your program is breaking. 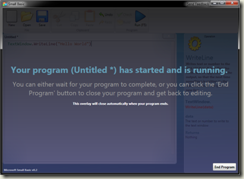 What’s neat is that they’ve integrated a Logo equivalent.  This means that you can code a Turtle to draw things on the screen – definitely a great way to teach kids programming. 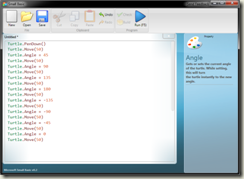 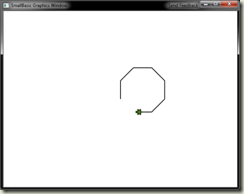 Ok, so my artistic skills aren’t great but you get the idea.  I love what Microsoft is try to do with Small Basic and encourage you to give it a try.