How North Sydney Council Deals with an Economic Crisis

Over the weekend I found myself walking down through North Sydney only to be confronted by what can only be described as a meaningless art installation.  It would appear that whilst the rest of the world is trying to work out how they are going to survive the economic crisis, the North Sydney council is wasting money on artwork for Miller Street. 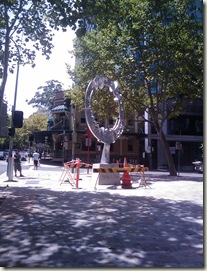 Don’t get me wrong I’m all for improving the suburb I live in but honestly another couple of trees would have been a much better and more sustainable investment. As far as I can tell the installation doesn’t have any symbolic meaning but perhaps there is an equally expensive sign to go with it that will explain it.

As a North Sydney rate payer I feel this is an astounding waste of money and that the money could be much better spent.