With the April update of the Windows Phone 7 developer tools, which adds compatibility with Visual Studio 2010, you also get an update to the Windows Phone 7 emulator. One of the things that was missing in the previous build was the ability to pin your application to the Start. In this build you can go to the application list (click the right arrow from the Start), tap and hold on the application you want to pin to Start. This will display a drop down list of actions, including “pin to start”, select this item and return to Start to see your application. 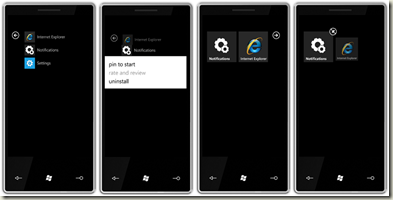 You can also check out the unlocked emulator image to see a few more of the updates in this build. Note that you can actually replace the emulator image installed with the Windows Phone 7 developer bits (ie C:Program FilesMicrosoft SDKsWindowsPhonev7.0EmulationImageswm70C1.bin) as the new unlocked image supports debugging from within Visual Studio 2010/Blend. I would take a copy of the official rom image just to be safe!