In my previous post, Visual States in Xamarin.Forms using BuildIt.Forms, I showed how to use BuildIt.Forms (https://www.nuget.org/packages/BuildIt.Forms) to create visual states that can be used to define how the user interface changes to reflect different states of the page. The example demonstrated switching between visual states in the code behind with calls to VisualStateManager.GoToState. In this post I’m going to extend the example to allow the states to be switched from a view model.

I’ll start by creating a view model that will be data bound to the page. Usually I’d use a framework like MvvmCross to drive the view model/view instantiation but for this example I’ll keep it simple. I will however still put the view model in a separate project – again this promotes good separation between the view models and their associated view. I’ll create a new .NET Standard library, FormsWithStates.Core, and add a reference to it into the FormsWithStates.UI project. 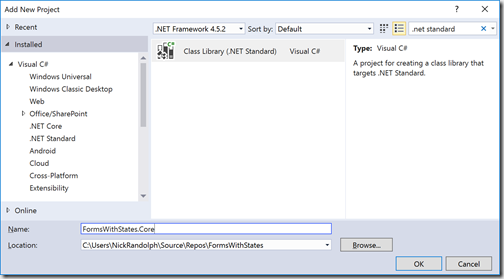 I’ll add a new class to the project, MainViewModel, which will be the view model for the MainPage of the application. To track states within the view model, I need to add a reference to the BuildIt.States library on NuGet.

The MainViewModel will define a simple property WelcomeText to demonstrate that the view model is indeed data bound to the page. It also implements the interface IHasStates which defines a property StateManager – you can think of the IStateManager implementation as an object that can track states and state transitions.

Whilst from the perspective of a user, there is no difference (since the Show and Hide buttons do the same thing), state management has been shifted to the view model where it can be tested. This separation of views and view models is important to ensure all application logic can be tested.