I’ve been struggling to get the Android emulator to perform at a level where debugging was possible. After upgrading to VS15.8 I was able to switch over to use the new Windows Hypervisor support (note that “Windows Hypervisor Platform” is different from the Hyper-V feature in the Windows Features dialog). However, I found that the performance of the emulator was so bad that debugging was barely possible – infinitely worse than when I was using the HAXM support.

After spending a bit of time searching online I came across references to versions of the Android emulator that were higher than what I was using. I double-checked the Android SDK Manager just in case there were updates available but there were none.

Eventually I realised that by selecting the cog in the lower right corner of the SDK Manager I was able to switch from the Microsoft repository across to the Google repository. 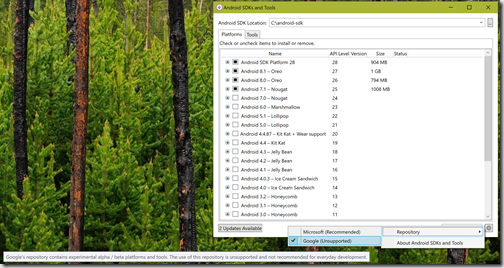 After switching to the Google repository there was indeed an update to the tools, which included the new emulator version.

Did this fix the performance issue? Not entirely. Performance was better in the Android P emulator but still nowhere near as good as a real device (even an old one).

If all else fails, go to the source. I reached out to Miguel and asked if this was a known issue. 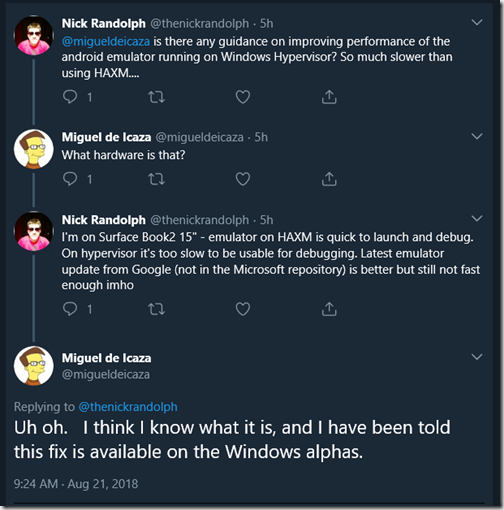 Looks like we need to wait for a Windows update in order to get this performance fix.