In this post I’m going to do a bit of a refactor based on the work completed in the previous post where we added code directly into the MainViewModel to use the Azure Active Directory Authentication Library. This would be fine if the MainViewModel was the only view model in the application that needed access to the Authenticate method. As I will probably want to make use of it elsewhere, I’ve decided to refactor that code into a class called CredentialService.

When I wired up MvvmCross a couple of posts ago, I did so without going into much detail on how the relationship between view models and their corresponding page is setup. I’m not going to delve into the inner workings of MvvmCross but suffice to say that there is some reflection magic that goes on based on the names of the classes. A view model with the name MainViewModel will be paired with a page called MainPage.

In addition to the magic that glues the view model and pages together (and thus the navigation model) MvvmCross also has a quite powerful dependency injection framework. The CredentialService that I’ll be creating will be registered with the DI framework as a singleton that can be easily accessed.

The platform specific code will need to be extracted out of the MainViewModel.Platform.cs into the corresponding CredentialService.Platform.cs. For example the UWP class would be:

In order to register the CredentialService with the DI framework, we just need to add a small bit of code to the Initialize method of the App class in the Core library

And that’s it – we haven’t changed any functionality but the solution is better organised and structured in a way that services can easily be added without cluttering up view models. 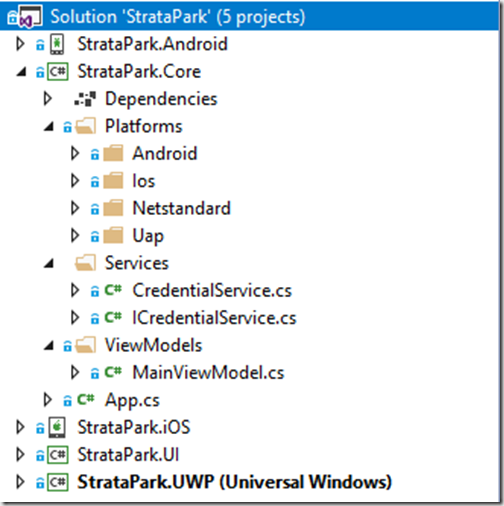