I was attempting to debug some code in a .NET Standard library that was being referenced from a Xamarin.Forms base UWP application. Unfortunately, it didn’t matter where I set the breakpoint in the library, they were never hit. Initially I thought that this was related to it being a multi-targeted project but it turns out this same issue applies to a regular .NET Standard library.

The only hint I had was when the application was running there was a yellow warning triangle on my breakpoint which a pretty unhelpful, yet accurate, message.

Now you’d have thought that since this project was included in the same solution as the application, that it was being built by Visual Studio as part of building and running the application, that you wouldn’t have to do anything special to get step through debugging to work. This is not the case – it appears that debug symbols can’t be loaded – huh! I mean seriously, we expect better.

I had also recently installed the first preview of Visual Studio 2017 15.9 so I thought that might be the issue but no, even opening it in 15.8 still showed the same issue.

So it turns out that there is an issue with the default build configuration – open project properties for the .NET Standard library and click on Advanced under the Build tab 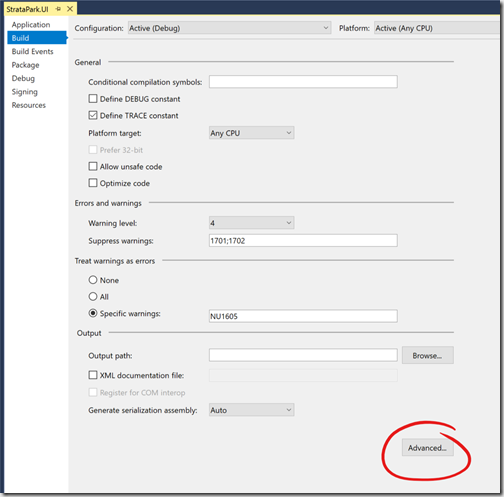 The default “Debugging information” value of Portable is what the issue is. Change this to Full or Pdb-only

Doing this will set the debugging settings for the currently selected target framework and platform. For example for my project it generated:

And there you have it – step through debugging should now work. I’m not sure why it’s so hard for Visual Studio to either use this option by default, or at least provide a useful warning that directs the developer to either documentation, or actually switches the setting automatically.