Having validated that the MvvmCross Playground was indeed broken, I next wanted to test to see if it was an issue with Xamarin.Forms itself. To do this, I started by creating a new Xamarin.Forms application (I’m just going to build for Android, since this is just a sample). 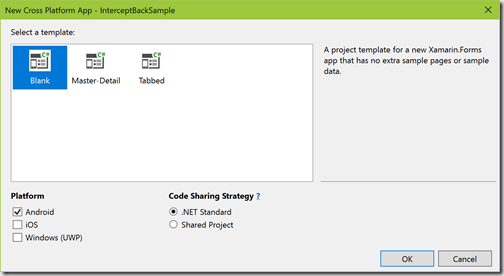 The Blank application template comes with a single page, MainPage. I added a second page to the application: 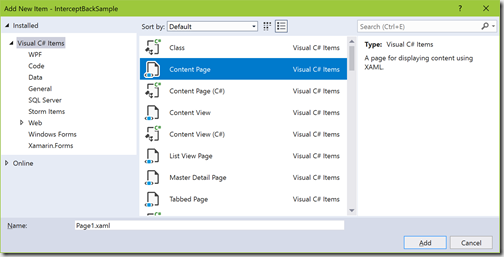 Onto the MainPage I added a Button and in the Clicked event handler added code to navigate to the page I just added:

In order to get the navigation bar to appear, I changed the App constructor to make use of a NavigationPage:

Lastly, I needed to add the OnOptionsItemSelected override to the MainActivity.

Unfortunately, after doing all this, the OnOptionsItemSelected method was still not called. Looks like the issue sits with Xamarin.Forms, so it’s time to start trawling through the source code.

After an initial inspection it appears that the FormsAppCompatActivity does override the OnOptionsItemSelected method, but that doesn’t explain why overriding it in my application wouldn’t work. However, further inspection revealed that the NavigationPageRenderer (the renderer for the NavigationPage) implements the IOnClickListener interface and registers itself with the ActionBar (which corresponds to the navigation bar). Doing this prevents the call to the OnOptionsItemSelected method, which is why we were not seeing it called.

I figured that I would try extending the default renderer and provide my own implementation of the IOnClickListener interface:

This works and the OnClick method is invoked when the software back button is tapped. Of course, we then need to route this to the current page so that it can decide if it should allow the back navigation.

Turns out that it’s nothing to do with MvvmCross and that the issue lie entirely with Xamarin.Forms. There needs to be a better way to intercept the back navigation. Someone has already listed a issue with Xamarin.Forms, so add a comment and make sure this issue gets some attention.

1 thought on “Intercepting the Android Software Back Button in Xamarin.Forms”