I noticed earlier this evening that there was an update available for Visual Studio 15.9. Normally I wait a few days to update as I’m not in any particular hurry but I noticed in the blog post and release notes that work had been done on the Android build and execution. I also remembered that I hadn’t updated Visual Studio or my emulator images since updating my Surface Book 2 to the latest Windows update – it contains a fix for the awful performance of the Android emulator running on Windows hypervisor. Anyhow, the upshot is that I updated Visual Studio to the latest preview….

I decided to drop my existing emulator images and create new ones. Unfortunately this was a bad idea as I was then unable to start the new emulator images. When I attempted to start the emulator I would get an error stating “The requested operation requires elevation. (Exception from HRESULT: 0x800702E4)”. 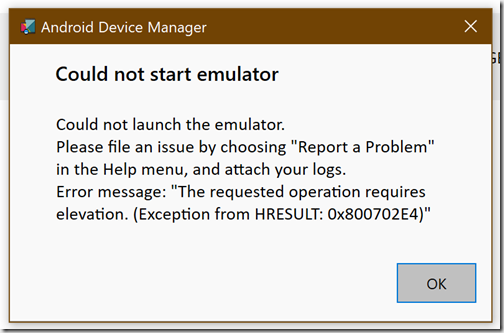 Turns out I’m not the only person seeing this, as someone had already reported this issue.

It also turns out that there’s a simple solution…. close the Android Device Manager and just hit Run from within Visual Studio. Turns out that this causes the emulator image to boot, deploy and run the application. And all the updates seem to do the trick, debugging is back to an acceptable speed.