There are two things that I find somewhat frustrating about Visual Studio 2019; that is until I spent a minute or two adjusting the behaviour of Visual Studio when I build my projects:

This is by far the biggest wasted feature ever added to Visual Studio – This annoying window pops up by default when building a project and has NOTHING useful to say, other than a progress bar across the bottom indicating some sort of percentage through the build. The following window shows the build progress of MvvmCross. However, it’s completely incorrect as not all 47 projects are set to build. In fact what I asked it to build probably has around 10 projects.

Why does this window even exist? Is there some other project type where there is more information displayed in the big white void? 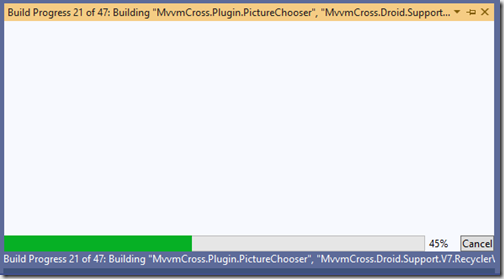 The following image shows the Error List window after a successful  build. What the? I’m sorry but is it really so hard to show just the errors from the most recent build? And perhaps order them in a somewhat meaningful way? In the end I always end up going to the Output window, looking at the first build error encountered and fixing that – pretty much the fastest and most reliable way to get a broken build to work again.

The great thing about Visual Studio is that there are a ton of options. In this case I can adjust a couple of options under the Projects and Solutions node to limit my expose to these two redundant windows.

– Uncheck the “Always show Error List if build finishes with errors” – since as we’ve seen the Error List window isn’t the greatest at working out whether the build was successful or not.

– Check the “Show Output window when build starts” – this will effectively hide the Build Progress window. 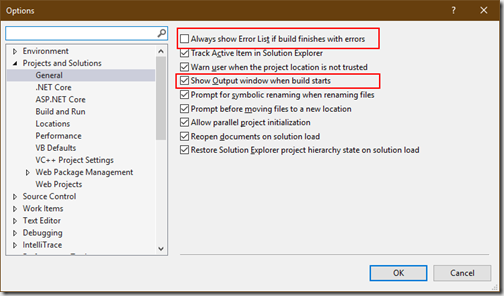