This post is a stepping stone to get local debugging working for a Http/2 service over Https from a Xamarin.Forms application. In my post on publishing to Azure I covered the fact that the underlying service receives a Http/1.1 connection, despite applications establishing a http/2 connection. This made it difficult to build out applications that use technology such as GRPC which rely on the http/2 protocol. To make it possible to develop both the mobile app and the services locally, we need to setup the ASP.NET Core debugging to allow the applications (ie each of the supported platforms) to connect.

This post assumes that the ASP.NET Core application is being hosted locally using Kestrel, mainly because of the limitations around http/2 (here and here). By default, when you create an ASP.NET Core application it is setup with multiple launch configurations, allowing you to switch between IIS Express, Kestrel and if you select the Docker option when creating your project, you’ll see an option to launch using Docker (as shown in the following image showing the launchSettings.json for the HeaderHelper project). 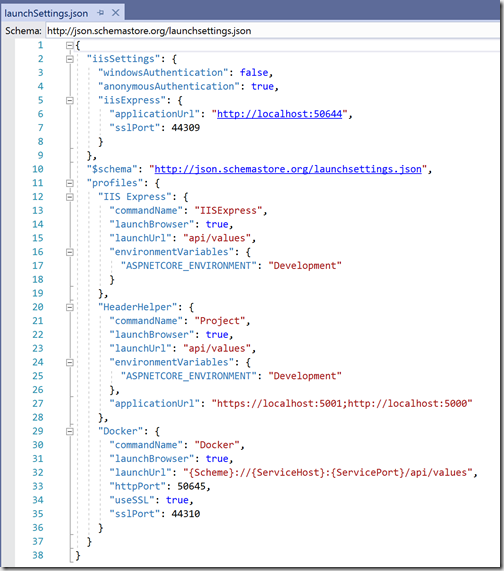 To switch between the different launch configurations you just need to select the right configuration from the run dropdown in Visual Studio – in this case I’ve selected the HeaderHelper option, which as you can see from the above launch configurations uses the “Project” command name that correlates to hosting using Kestrel (I know, not super obvious, right!). 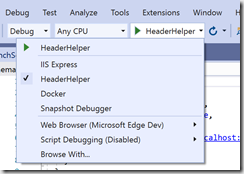 When we run the ASP.NET Core application using the default launch configuration on Kestrel, what we see is that a command window is shown (since Kestrel is basically a console application) and then a browser window is subsequently launched. As you’d expect the out of the box experience is all good – we can see it’s launched the https endpoint and there’s the lock icon to indicate it’s trusted. 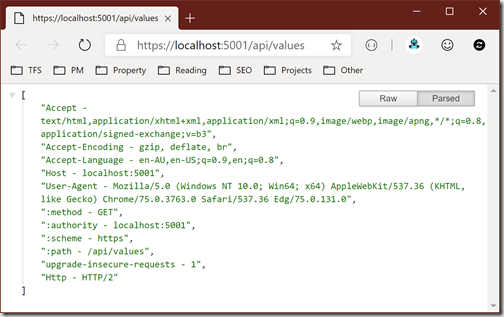 It’s also interesting to note that the service is returning Http/2 when according to this document (see screenshot below) the default is Http/1.1. 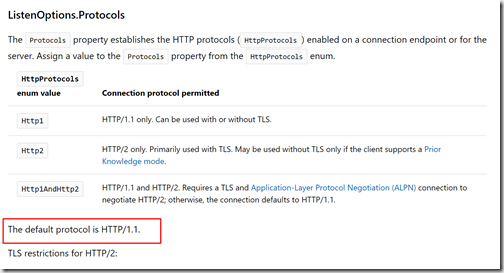 Well, it looks like the documentation hasn’t been updated in line with the latest code. If you take a look at GitHub for AspNetCore repository you can see that between the stable v2.2.4 and the v3.0.0-preview4 release there has been a change to the default value.

Coming back to our Kestrel hosted ASP.NET Core application, we can see that the endpoint host is localhost, which aligns with what’s in the applicationUrl property in the configuration in the launchSettings.json file. Unfortunately, localhost isn’t great when it comes to working with mobile applications as localhost doesn’t always resolve to the development machine. For example if you’re working with a real iOS or Android device, they’re most likely going to be on the same WiFi network but localhost won’t resolve to machine running the ASP.NET Core application. Similarly if you’re developing on a Windows PC and using a remote Mac to do the build and run the simulator, localhost again won’t resolve to the correct machine.

To solve this, we need to change the Kestrel configuration to expose the service in such a way that it can be accessed via the IP address of the machine where Kestrel will be running. Note that there are plenty of services such as ngrok, portmap.io and Forward which are great and easy to setup for non-secure services. However, once you get into trying to extend the configuration to support Https or Http/2 you end up needing to pay to use their premium service. These services are great if you want to extend beyond the bounds of your firewall but are overkill if all you want to do is expose your service for development purposes.

A much similar alternative is to:

I’ll elaborate on these in more detail – and I’m going to do them in reverse order because the firewall rule is required in order to verify the Kestrel configuration is working when binding to the IP address.

On Windows, it’s relatively straight forward to add a firewall rule that will allow inbound connections on specific ports. In this case we’re interested in adding a rule that works for ports 5000 and 5001, which are the two ports used in the applicationUrl property of launchSettings.json. Here’s the step-by-step

– When prompted for the type of rule, select “Port” and click Next

– Click Next, accepting the defaults on the remaining pages of the New Inbound Rule Wizard, through to the final page where you’ll need to give the rule a name before hitting Finish.

Once you’ve created the Inbound rule, any requests made on these ports will be allowed through to whatever service is bound to those ports on your computer. You should disable this rule when you’re not making use of these ports for debugging.

Binding Kestrel to All IP Addresses

This can be done simply by changing the launchSettings.json file to replace localhost with 0.0.0.0:

When you rebuild (you may need to force a rebuild as sometimes the change to launchSettings.json isn’t picked up by Visual Studio) and attempt to run the application you’ll see an error page – this is because 0.0.0.0 isn’t actually a real IP address, it’s just the address used in the launchSettings to configure Kestrel to bind to all addresses. 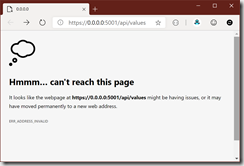 If you change the address to use localhost instead of 0.0.0.0 you’ll again see that the api result is returned successfully. However, if you now use the actual IP address of the computer (in this case 192.168.1.107) you’ll see a certificate warning. Clicking the Advanced you can proceed to the site and see the result but the “Not secure” in the address bar will remain. 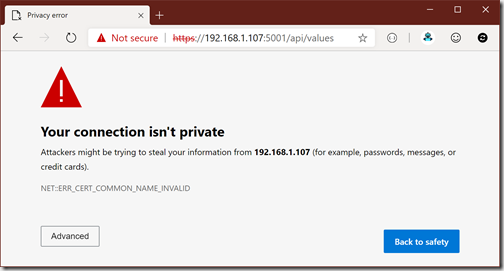 The fact that there’s a security error is going to cause a lot of issues if we don’t resolve it because none of the application platforms (ie iOS, Android, UWP) work well with Https when the certificate can’t be verified. Even if you use certificate pinning (to be covered in a future post) you’ll find it hard to configure the different platforms to work with certificates that don’t match the domain of the service.

If we take a look at the certificate being used, we can see that the Subject Alternative Name only matches with localhost. 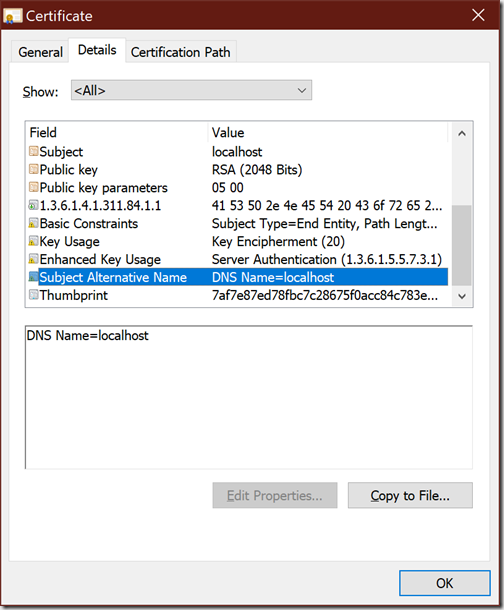 Luckily this problem can be fixed by changing the certificate that is used by your ASP.NET Core application. If you’re planning on exposing your ASP.NET Core endpoint directly to the internet I would recommend getting a certificate from a well known CA. The following process can be used for setting up your service for development purposes:

If you know what you’re doing you can download the latest openssl and proceed to create your own certificates. However, this is fairly involved and a much similar way is to leverage the mkcert tool that is available at https://github.com/FiloSottile/mkcert. The steps are as follows:

– Download the latest binaries for mkcert (you might want to rename the executable from say mkcert-v1.3.0-windows-amd64.exe to mkcert.exe for convenience)

– Run “mkcert -install”. If you get an error such as “failed to execute keytool…..”  you probably didn’t read the previous step and opened a regular command prompt. You need to be running as Administrator

The install process creates a certificate and trusts it on the local computer as a trusted certificate authority, meaning it can be used to generate other certificates.

– Run mkcert to create a certificate that you can use in your ASP.NET Core application

– Copy the newly created kestrel.pfx into the ASP.NET Core project and set the Build Action to Content to make sure it gets deployed with your application. 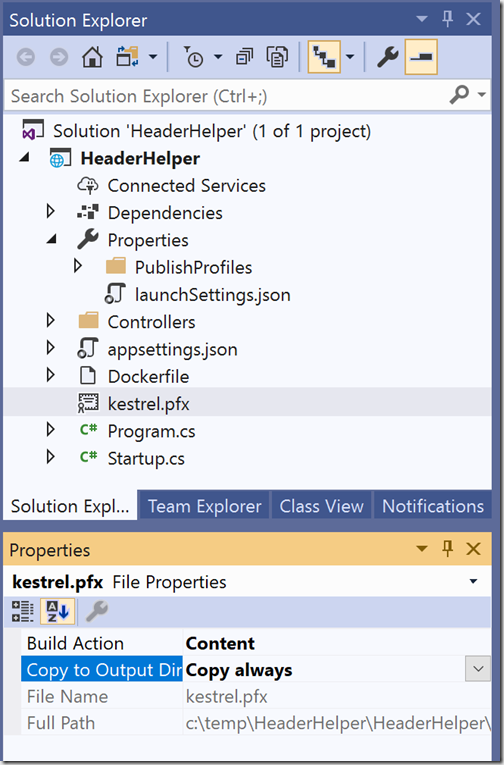 – Remove the applicationUrl property from the Kestrel configuration in launchSettings.json

– Update the CreateHostBuilder method in program.cs to setup the Kestrel configuration. Specifically setting up both ports 5001 and 5000 to listen on Https and Http respectively. For port 5001 the kestrel.pfx certificate is used (note despite the advice we haven’t changed the password here but would recommend doing so if you’re going to use this in production)

Now when we run the ASP.NET Core application on the Kestrel hosting we can successfully navigate to the endpoint using the machines IP address. 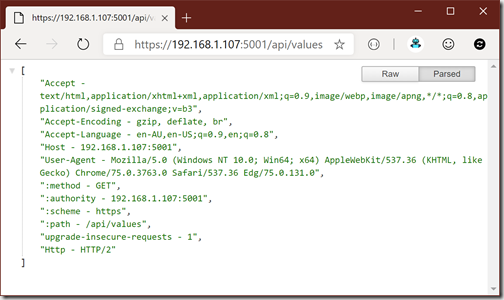 Inspecting the https certificate you can see that the Subject Alternative Names include 192.168.1.107 (ie the machines IP address) and that the Certification path ends in the mkcert certificate that has been added to the trusted certificate authorities on this computer. 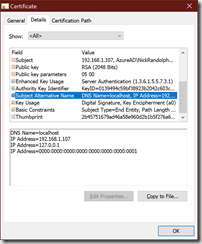 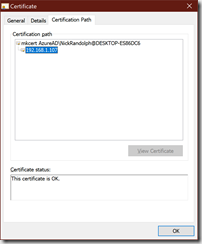 Now that we’ve configured Kestrel and ASP.NET Core to play nice, what we need to do is to configure our mobile applications to connect to this service, which we’ll do in the next post.