As there was a bit of discussion as to the pros and cons of different mobile platforms, some of the community set out to see how many lines of code it would take them to build the same sample. Thomas tweeted about doing it in Flutter which originally came in a 93 lines of code (I question the choice of colours and definitely prefer the colours in the original sample)

Update: In my original post I didn’t link to the correct info. Thomas’ calculator came in at 90 lines of code and sticks with the original colour scheme 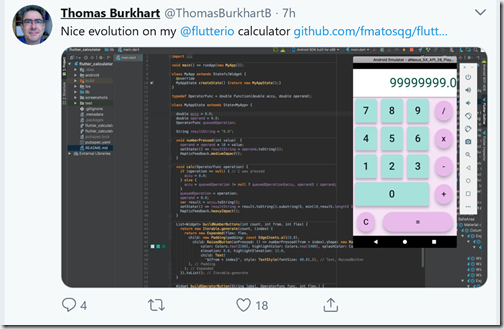 I tweeted in jest that a XAML app wouldn’t get out of bed for less than 100 lines of code, and sure enough when I did a very quick attempt it came in at approximately 70 lines of XAML and the same again for codebehind, so ~140 lines all up. I think with a bit of optimising I could get it down to say 120 lines but the reality is that XAML is verbose and that there is a cost associated with splitting the code between XAML and codebehind. Of course, if I’d actually applied an MVVM pattern it’d probably jump up to say 150 lines of code.

One way I could optimise this to get a result closer to either the Elmish or Flutter examples would be to do all my layout in code. I mentioned in my post on using declarative C# that following Vincent’s example of using extension methods you can easily do your layout in C# and avoid any of the overhead of splitting out XAML, C# and ViewModel code.

For those who have been building apps for long enough, you’ll remember how we despised building Windows Forms applications because all the layout was done in code – sure there was a design experience, but before long you were writing a lot of logic to manipulate the UI which resulted in mal-formed code that was a pain to debug/maintain. Is this where we’re going to end up with all these code-first approaches to defining layout? (and this question isn’t about which platform is better, it’s about declarative over coded UI).

By way of example, stop and take a look at the code Thomas put together in his Flutter example – very efficient but imagine it on a much more complex application. You can quite easily see how it’s going to become hard to understand/follow for a developer who has to maintain it.