It’s clear that talking about Progressive Web Applications (PWAs) is all the rage. I noticed today that fellow Microsoft MVP, Adam Pedley who runs the Xamarin Help website and blog, posted about where PWAs and Xamarin.Forms fit. Whilst I’m not sure I agree with his opening statement about PWAs being started by Google (there is a long legacy of different browsers providing pseudo-offline features which pre-date the term PWA, so the concept itself isn’t new), I will definitely agree that it has been Google that has been championing the cause, with Microsoft adding some behind the curtain support (eg PWABuilder.com). One of the most interesting points that’s worth highlighting is the disconnect between the device features/capabilities that the web and client applications (native, Xamarin or Xamarin Forms) can take advantage of. Whilst the difference is being progressively eroded, there are still plenty of areas where a client application is the way to go. Shout out to https://whatwebcando.today/ 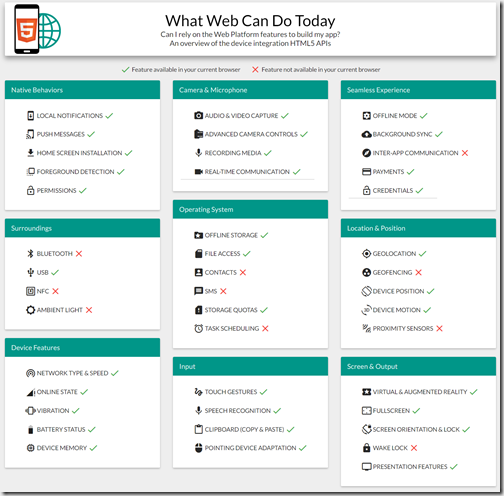 A new release of the following libraries is available via NuGet (v1.1.0.134):

Whilst not much has changed in terms of features, behind the scenes there was quite a significant change as we adjusted the solution/project structure, and thus the nuget package structure. We took advantage of the ability to multi-target which meant we no longer have to have separate projects/libraries in order to support platform specific features. BuildIt.General, which used to have a UWP specific library, is now a single libary. Same goes for BuildIt.States. BuildIt.Forms has two libraries, down from the 5 that it used to have.

In this release we’ve released multiple packages with the same version number, even though there is an interdependency between them (Forms –> States –> General).

Please reach out and let me know if you see any issues in this release with any of these libraries. We’ll be working to release updates to the other BuildIt libraries over the coming weeks.