Back in the days of Silverlight/Windows Phone Microsoft launched a tool called Expression Blend that allowed developers and designer to work in harmony with developers doing their thing (ie write code) in Visual Studio and designers creating the user experience in XAML using Expression Blend. Fast forward a few years and Expression Blend has been rebadged to Blend for Visual Studio and most of the features of Blend have now been migrated to Visual Studio. With the demise of Windows Phone and the lack of developer interest in building for just Windows, Blend is now a tool that most developers have all but forgotten. So, why am I bringing this up now? Well, one of the features I missed from Blend is the ability to have design time data that allows you to build out the entire user interface, with the design time data being replace by real data when the application is run. Whilst there have been some attempts at providing a design time experience for Xamain/Xamarin.Forms, the reality is that it comes no where close to what Blend was able to do in its heyday.

If we look at other platforms, such as React Native, there has been a shift away from design time experience, across to an interactive runtime experience. By this I mean the ability to adjust layout and logic of the application whilst it’s running, which relies on the platform being able to hot-reload both layout and logic of the application. There are some third party tools for Xamarin.Forms that partially enable this functionality.

One of the challenges I found when working with Visual States is that you often need to get the application to a certain point, or follow a particular sequence of steps in order to get a specific Visual State to appear. Take the example I provided in my previous post on page states where I provided DataLoaded and DataFailedToLoad states – in the example the appearance of these states was completely random, so you might have to click the button a couple of times in order to get the state to appear. Luckily, the BuildIt.Forms library has a slightly-hidden feature that allows you to manually switch between states. I say it’s slightly-hidden because if you connect your Visual States to a StateManager in your ViewModels (shown in either this post or this post) you’ll see this feature automatically. In the example I covered in my previous post I needed to add the following line to the end of the MainPage constructor:

Now, when I run the application I see a small dot appear in the bottom left of the screen. 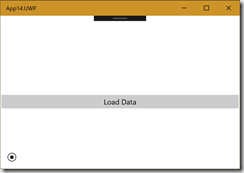 Clicking on the dot reveals a flyout that allows you to switch states:

Note that this is only shown when the Visual Studio debugger is attached so will not impact the way your application works in release mode.