In my previous post I did a walk through of creating a new Xamarin.Forms application and setting up the Core and UI projects for multi-targeting. Whilst I covered updating the various NuGet packages, I didn’t look at the SDK versions for the three platforms. In this post I’m going to look at the options for setting the SDK version, as it’s important that you update this to target the latest SDK version, even if your application is going to support older platform versions. 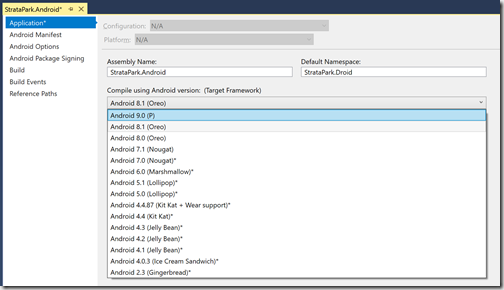 Next, on the Android Manifest tab, select “Use Compile using SDK version” under the Target Android version. On this tab you can also set the Minimum Android version if you don’t want to accept the defaults – this may be relevant if you don’t want a massive support matrix for your application as it will prevent installation on devices running a version of Android older than the minimum. 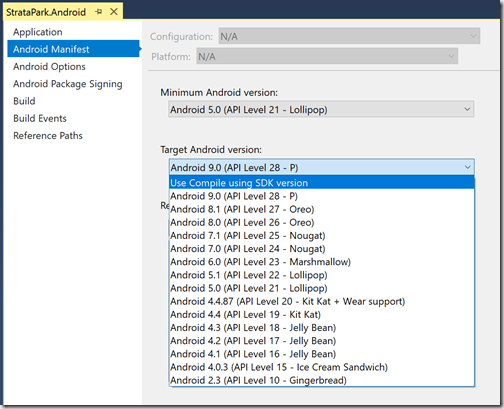 Setting the SDK Version for iOS is straight forward and the recommendation is to leave the “Default” (which should be the default value) in the SDK Version dropdown on the iOS Build tab on the Properties pane for the iOS application.

If you want to adjust the minimum supported version of iOS, you can do this by double-clicking the Info.plist file for your iOS application and then adjusting the Deployment Target. 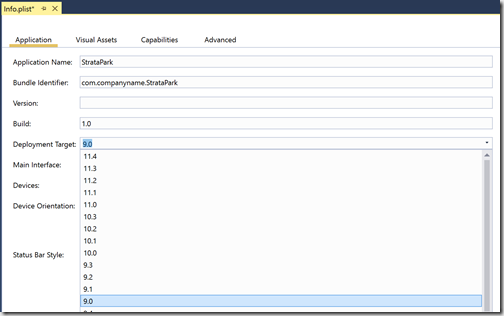 Both the Target and Min version of the UWP application can be set from the Application tab of the Project Properties pane. Setting the Target version defines the SDK version that will be used to compile the application and thus the APIs that are available. 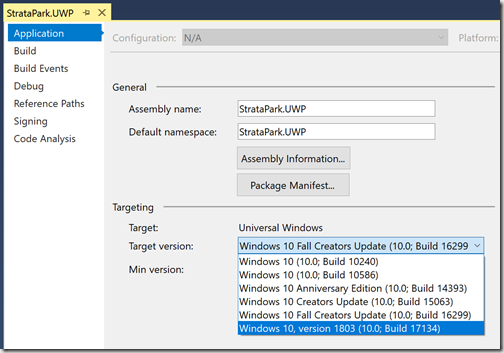 Now that the Core and UI libraries are set to be multi-targeted it is also necessary to define what the target framework/version should be for each platform. If you don’t do this, you may be limited as to what platform APIs are available. Rather than setting these values in each of the libraries, we can create a file, Directory.build.targets, in the solution folder and include the appropriate elements there – this will get included in all projects that support the new csproj format. In this case the contents of our Directory.build.targets file will look like

The csproj for both Core and UI projects also needs to be updated to replace the target framework MonoAndroid81 with MonoAndroid90.

All your projects should now be targeting the latest framework/sdk versions. If you find that some, or all, of these changes don’t take effect, you may need to either reload specific projects, or restart Visual Studio.