Previous posts in this sequence:

Getting Started with Xamarin.Forms and Multi-Targeting in Visual Studio

Getting Started with Xamarin.Forms and SDK Versions

Next up is adding in MvvmCross – no surprises here: Add the MvvmCross package to all projects in the solution

We need to make a few adjustments to the Core library. First up, we need to add an App class to Core that inherits from MvxApplication. For the moment the only thing this class is going to do is to set the initial view model of the application. One of the core ideas behind MvvmCross is that navigation is driven from view models, rather than at the view level. By setting the initial view model, we’re effectively defining which view will be shown when our application launches.

We’ll do a bit of tidying up whilst we’re making changes to the Core project. We’ll create a ViewModels folder and move MainViewModel into folder

Now that we’ve updated the Core library, we’ll turn our attention to the UI library and the head projects. We’ll add the MvvmCross.Forms NuGet reference to all projects, except Core.

The only other change we need to make to the UI library for the moment is to update MainPage to inherit from MvxContentPage instead of ContentPage. You’ll need to do this in both the xaml and xaml.cs files. However, I would recommend dropping the inheritance from the xaml.cs file as it is not required in multiple places.

Next up we need to adjust each of the head projects (UWP, iOS and Android) so that they use MvvmCross to launch the Xamarin.Forms views.

Rename MainPage to HostPage (in both MainPage.xaml and MainPage.xaml.cs, and the filenames themselves) in the UWP head project – we do this to avoid any confusion between the name of the page and any views that are automatically associated with MainViewModel. Also update HostPage to inherit from MvxFormsWindowsPage.

For UWP we need an additional step due to some limitation around the support for generics. Add a help class ProxyMvxApplication, defined as follows:

Change App.xaml and App.xaml.cs to inherit from ProxyMvxApplication, and remove all code in App.xaml.cs other than the constructor which should contain a single call to InitializeComponent. Override the HostWindowsPageType method in the App class

Build and run the UWP application

Update the AppDelegate as follows

Build and run the iOS application.

Rename and update the MainActivity as follows. Again, we rename the activity to avoid confusion with any activity or view that would be automatically associated with MainViewModel.

Build and run the Android application.

You may experience a build error when you attempt to build and run the Android application, relating to referencing the Mono.Android.Export library. In this case, use the Add Reference dialog to manually add the missing reference. 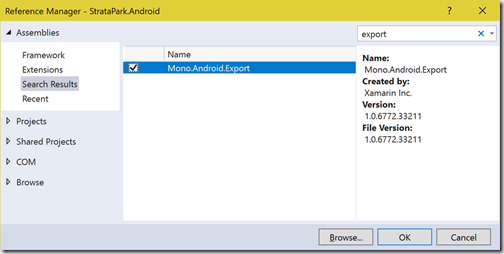 There you have it – all three platforms running Xamarin.Forms application powered by MvvmCross.