I figured that since I had Uno working in WebAssembly locally on my machine that I’d try publishing it out to an Azure App Service. I mean, how hard could it be since Visual Studio recognises that the Wasm project is a web project (nice job there team Uno!) and even gives me the option to Publish. 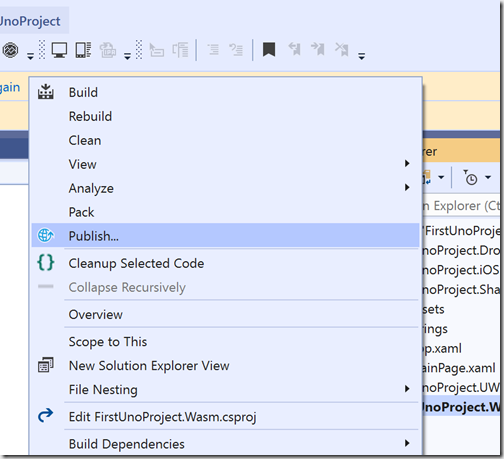 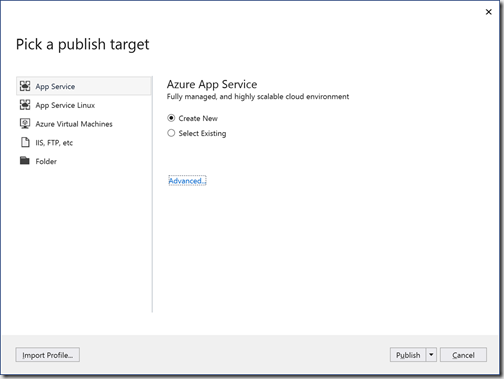 I made use of an existing Resource Group and App Service Plan that I had lying around. 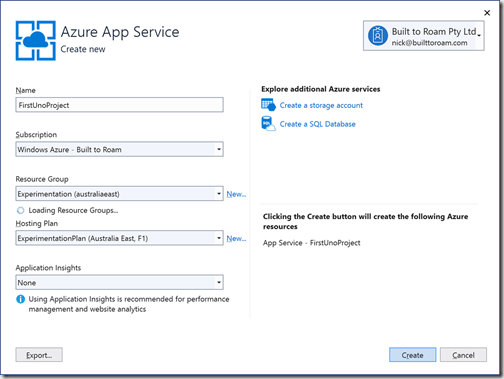 After hitting Create and publish Visual Studio went off thinking for what seemed like a long time with nothing happening. I knew it was probably busy packaging and deploying but I didn’t see anything appear in the Output window…… not surprisingly because Visual Studio pushes all the logging for the publish operation to the Web Publish Activity window.

Once it was done Visual Studio launches a browser window displaying the root of the newly created App Service. Unfortunately, this is not my Uno project.

After investigating a little I realised that the publish operation was uploading the Wasm project to a sub folder of the wwwroot folder within the App Service (eg  wwwrootFirstUnoProject.WasmbinReleasenetstandard2.0distindex.html). I validated this by using the Advanced Tools from the Azure portal.

From the Advanced Tools, select Files 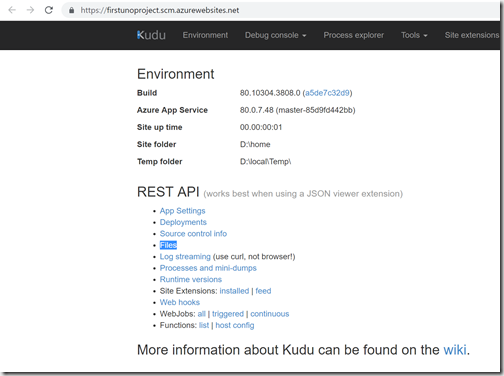 Browsing the files you can locate the index.html that gets published with the Wasm project. This is the file that hosts the wasm

Unfortunately just adding the appropriate path to the index.html to the site url doesn’t seem to work (ie this doesn’t work: https://firstunoproject.azurewebsites.net/FirstUnoProject.Wasm/dist/bin/Release/netstandard2.0/dist/index.html). However, you can easily set up a new application to point to the dist folder. Go to Application Settings and under the section Virtual  applications and directories, create a new mapping. In this case I’ve mapped /uno to the sitewwwrootFirstUnoProject.WasmdistbinReleasenetstandard2.0dist folder (you can get the folder from the “path” shown in the Kudo – Files explorer) and I’ve made it an Application.

If you now attempt to go to the index.html page in your new mapped folder (eg https://firstunoproject.azurewebsites.net/uno/index.html) you’ll find that you’ll see the “Loading…” text that comes with the Uno project template but your application won’t load. If you spin up the Chrome debugging tool you’ll see that it’s not able to find the mono.wasm file with a 404 being raised. Don’t bother trying to work out whether the file exists or not because the issue is that whilst the file exists, the Azure App Service isn’t going to serve it because it’s not a known file type. Luckily there’s a simple solution. Add the following Web.config to your Wasm project and publish your application again.

I just noticed that the Uno Visual Studio Extension has been updated, so I figured I’d give it a go in Visual Studio 2019. After installing the extension I used the new startup dialog on Visual Studio to “Create a new project”. I searched Uno but Cross-Platform or any of the target platforms would show you the templates. 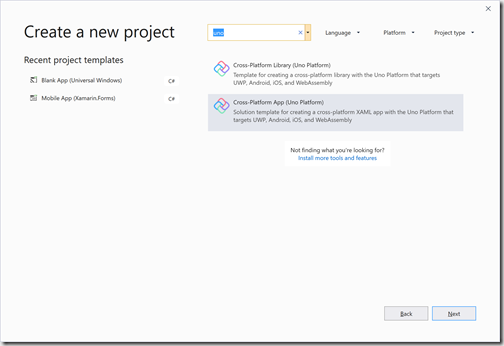 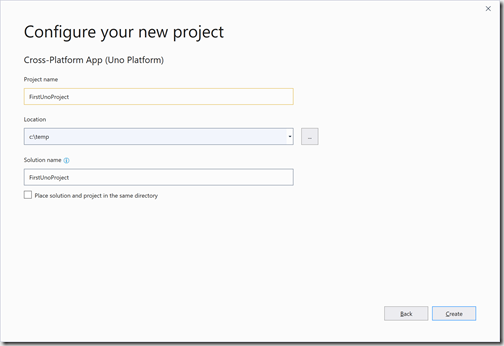 Seconds later I had a brand new solution with five projects giving me the ability to target iOS, Android and Wasm all from the code I write in a UWP app.

Selecting the Wasm project I set it as the startup project and hit F5 to run. After a few minutes of building (the first build is slow as it downloads packages etc) it launched Chrome with my fancy Hello World project running.

I wanted to add some content to my page but figured I’d start off slow – how about a couple of labels and a button:

and a bit of code behind:

Now tell me you don’t expect this to work on the web, right? Sure enough works a treat.

It’d be great if the message box had “Pressed” as the title instead of “localhost:5210 says” but I’m still mind blown that this still works?

One thing to be aware of is that I’ve had some mixed experiences with Wasm as the resoluts seem to vary depending on which combination of Uno packages are referenced. This is definitely a work in progress but I feel that this is probably in line with where WebAssembly support is at across the board.

Web Development with NO JavaScript; Is Uno the Future Web Platform?

This is probably stating the obvious but I’m a big advocate for rich client applications. With the recent advances in PWAs I’m looking down the barrel of having to concede to all those fellow developers that have jacked themselves up on as many JavaScript frameworks they can find and now charge through the roof because they’re one of only a handful who actually understand the difference between == and ===. I’m sure the time will come but for now, it may be that the Uno Platform can help me leverage my UWP skills in building apps for iOS, Android and the Web (via WebAssembly).

In my previous post I covered Getting Started with Platform Uno where I simply used the extension to create a new project and discussed running it on various platforms. One of the features of UWP that I really like is that ability to gracefully handle different screen sizes through the use of Visual States. So I figured I’d give states a go in my basic Uno app. Here’s the XAML (note there’s no code behind) for my MainPage:

Whilst this is a relatively simple example, when I build and run this, it not only works on UWP (expected) but also on Wasm. The image below shows the output – the red text has been added afterwards to indicate which Visual State the page is in.

Serious props to the Platform Uno team, this is awesome.

Getting Started with Platform Uno

A while ago I posted on Building a TipCalc using Platform Uno and at the time there was quite a few steps to jump through to get a basic application running from scratch. In this post I’m going to cover off how incredibly easy it now is to get started with the Uno Platform. Before I get into the steps, I want to give some background on why after almost a year am I coming back to looking at Uno. For those who have been reading my blog or have worked with Built to Roam you’ll know that we specialise in building cross-platform applications, whether it be a mobile app spanning iOS and Android, a Windows app targeting desktop and Xbox, or an enterprise solution that’s available across web, mobile and desktop. With a deep heritage in the Microsoft ecosystem we have seen the emergence of technologies such as Xamarin.Forms – historically this was rudimentary framework for rapidly developing forms based applications, primarily for line of business solutions. We’ve also seen other frameworks emerge such as React Native, Flutter and of course PWAs. Each framework has its advantaged and disadvantages; each framework uses a unique set of tools, workflow and languages. The question we continually ask ourselves is which framework is going to provide the best value for our customers and that will allow us to build user interfaces that include high fidelity controls and rich animation.

We also evaluate frameworks based on the target platforms that they support, which is what has led me to this post. One of the amazing things about Xamarin.Forms is that it has provided support for the three main platforms, iOS, Android and Windows, as part of the core platform. In fact the tag line is currently “Native UIs for iOS, Android and Windows from a single, shared codebase”.

What’s mind blowing is if you look at the Other Platforms page you’ll see that there is also support for GTK, Mac, Tizen and WPF. Unfortunately, these other platforms do not get the same love as the core platforms, so don’t expect them to be kept up to date with the latest releases.

At this point you might be thinking, why stray from Xamarin.Forms? Well in recent times there has been a shift away from supporting UWP as a core component of Xamarin.Forms. When asked on Twitter about UWP support for Shell, David Ortinau’s response was just another nail in the coffin for UWP app developers who are already struggling an up hill battle to convince customers of the value proposition of building for Windows.

So this leads me to again revisit other frameworks but we find the situation isn’t much better:

At this point I remembered that Uno provided an interesting take on cross platform development. I also remembered that they’ve been doing a lot of work to support WebAssembly, so perhaps this could be the perfect solution. In the simplest form, the Uno Platform is #uwpeverywhere (an initiative that I’ve long believed Microsoft should have championed, after all it’s called Universal for a reason, right?) but beyond that Uno is about being able to “Build native apps for Mobile and Web using XAML and C#”. 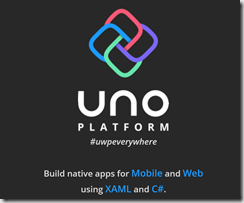 Let’s get cracking with building a Uno application and see how it pans out. If you’re on the Uno Platform homepage and wondering how to get started, don’t worry, you’re not alone – I was looking for a big “Get Started” button but instead I see links to sample apps and to the source code. If you find yourself across at the source code, you’re about to embark down the wrong path – you don’t need to grab their source code as everything is distributed via nuget! So where do you go? Well you need to find the Uno Documentation and then click the link to Getting Started – now we’re cooking with gas! Unfortunately most of this page is pretty useless until you come to want to debug your application on WebAssembly. Instead what you really want to do i install the Uno Visual Studio Extension and use that to create your application. 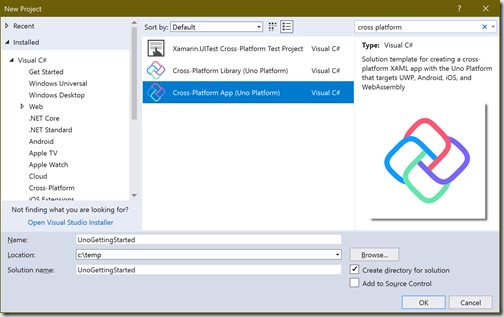 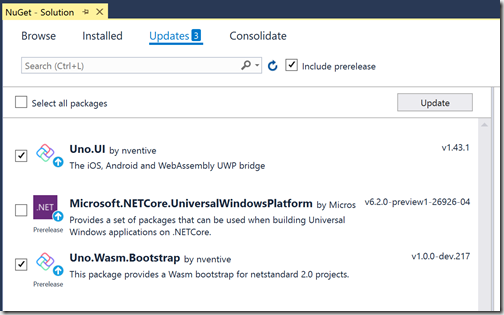 So, now that we have a UWP application that runs on iOS, Android, Windows and Web, are we satisfied with this as a cross platform solution? I think I’m enjoying working in UWP again but it’ll take a bit more investigation to see if this is a viable solution or not.